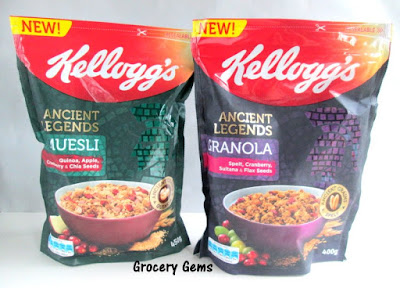 Kellogg's has launched a new range of cereals called Ancient Legends - all featuring ancient grains such as spelt and quinoa. These grains are usually seen in more expensive items so it's interesting to see them moving into some mainstream products. Apparently there are six new cereals in this range but I've only spotted two of them; Ancient Legends Muesli with Quinoa, Apple, Cranberry & Chia Seeds and Ancient Legends Granola with Spelt, Cranberry, Sultana & Flax Seeds. 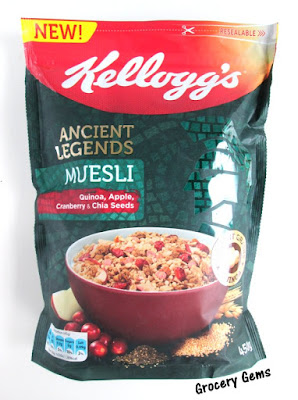 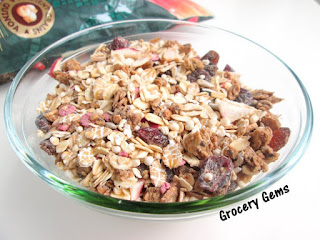 The Kellogg's Ancient Legends Muesli has an appealing appearance with a jumble of different ingredients. The oats are plentiful but so are the sultanas, cranberry pieces, apple and puffed quinoa grains. 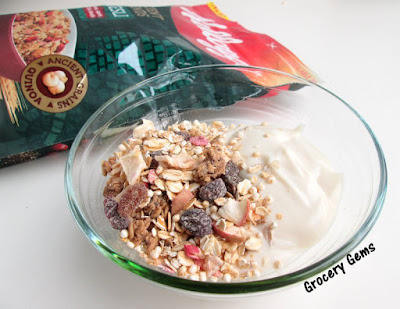 I enjoyed mine alongside a few dollops of Alpro Soya Plain with Almond (my favourite yogurt at the moment). The flavours within the muesli are all good with the apple and sultanas providing lots of sweetness. The combination of whole oats and quinoa gave the base muesli a slightly chewy texture and sadly there are no nuts here to provide any additional crunch. Despite this I still enjoyed this muesli, especially as a little side serving for the yogurt. If anyone has tried it with milk then let me know what you thought in the comments below.

I'm looking forward to trying the Kellogg's Ancient Legends Granola next - look out for a review soon!