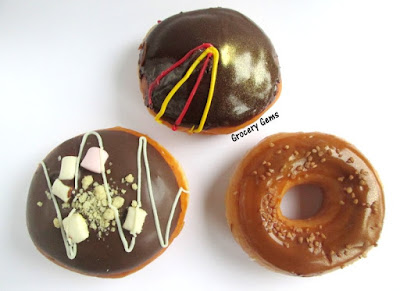 Krispy Kreme has released several new varieties recently, with a few more on the horizon in the coming weeks. The 'New Season' doughnuts are; Smores, Maple Crunch, Chocolate Firecracker and a Salted Caramel Cheesecake (which I wasn't able to find).

There is also a series of  'Vintage Krispy Kreme' flavours which are being released one by one during September and October. The vintage doughnut flavours planned are; Glazed Kreme (from 5th - 18th Sept), Powdered Blueberry (from 19th Sept - 2nd Oct), Cruller (from 3rd Oct - 16th Oct) and  a Pumpkin Spice (from 17th Oct to 31st Oct). I'm looking forward to the Powdered Blueberry and the Pumpkin Spice! 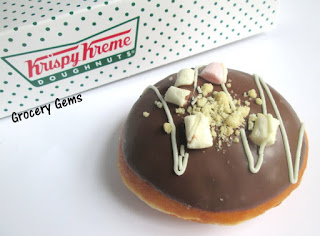 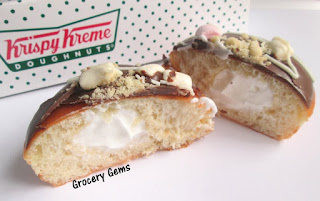 Smores Doughnut: The Smores is a milk chocolate covered doughnut topped with mini marshmallows, shortcake crumble and a while chocolate drizzle. It also features a mallow filling in the centre. I thought the flavours here all worked really well. The inner mallow filling tasted just like marshmallow fluff, it's super sweet and sugary but with a real marshmallowy flavour. The chocolate icing and toppings add a little extra flavour and texture. Overall it's a fun doughnut, and even though the flavours are not super exciting, I would still buy this one again. Rating: 7 out of 10. 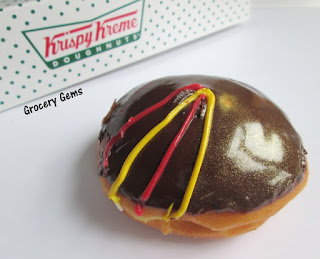 Chocolate Firecracker Doughnut: The Chocolate Firecracker is described as a doughnut dipped in chilli-infused chocolate icing, with a chocolate truffle kreme filling and topped with gold sugar stars. As you can see in my photo my doughnut was missing the gold stars although the icing did look very appealing with a gold glittery appearance. I do appreciate that Krispy Kreme, unlike many other food brands, have not forgotten that there is another season in between summer and Christmas, and the Chocolate Firecracker is a great looking doughnut for autumn. Unfortunately the flavour was not for me at all and I could only take one bite of this one. Even Mr. Grocery Gems found it totally inedible. The chilli heat in the icing does not work with the sweet and greasy nature of the doughnut and the whole effect is rather nauseating. Sorry Krispy Kreme but this one is not for us! Rating: 2 out of 10 (scoring points for looks only). 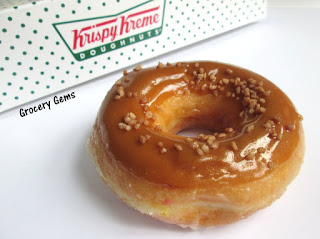 Maple Crunch Doughnut: Thankfully the Maple Crunch doughnut was much more appealing to our tastes. Mr. Grocery Gems in particular is a big fan of anything Maple Syrup flavoured. He's also not too too keen on filled doughnuts, so this simple ring doughnut is exactly to his tastes. The maple flavour here is exactly what he was expecting with a distinctive maple syrupy flavour coming through. The crunch on top adds a little extra interest but on the whole this simple doughnut is a flavour winner. Rating: 8 out of 10.

Have you tried any of the New Season Doughnuts at Krispy Kreme? If so I'd love to know what you thought in the comments below. Thanks!