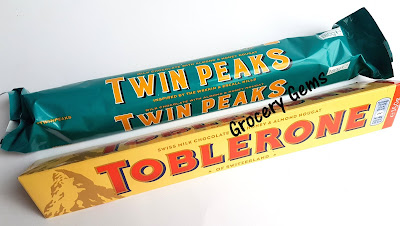 After some dispute with the makers of Toblerone, and a few changes to the design and colour scheme, Poundland were finally able to release their Twin Peaks chocolate bar. Instead of taking it's inspiration from Swiss mountains, the Twin Peaks bar is a much more British affair that is 'inspired by the Wrekin & Ercall Hills'. Of course since they are both comprised of milk chocolate with almonds and honey nougat, I thought they deserved a side by side comparative review.

Whatever it's origins, the Twin Peaks bar is definitely good value for money at 180g compared to the Toblerone at 150g. There are bigger Toblerone bars available but this is the nearest in value. Ironically enough I actually bought this Toblerone in a Poundland too. 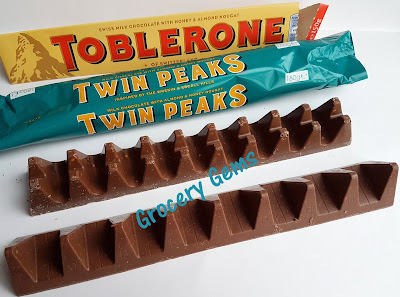 The Twin Peaks looks solid and chunky next to the longer and slimmer Toblerone. This is my first time seeing the new design of the Toblerone, with it's bigger spaces in between each triangle, and it doesn't look as ridiculous as I had thought it would. The Toblerone's outer packaging of cardboard and inner foil still makes it look more expensive compared to the Twin Peaks single plastic wrapper.

The chocolate itself has visible differences. The Twin Peaks chocolate (on the right) is very impressive looking with it's darker colouring and larger chunks of nougat throughout. The Toblerone has a creamier complexion with much smaller bits of nougat. Taste wise it was a close win for the Toblerone amongst my family of taste testers. The creamier and smoother chocolate of the Toblerone gave it a more enjoyable edge. As much as I hate to admit it, the larger spaces between chunks made the Toblerone simpler to eat, with each piece snapping off with ease. The Twin Peaks felt much harder to bite into, and whilst the flavour is satisfying enough, it's slightly sweeter and grittier than the Toblerone.

WINNER: Toblerone - but the Twin Peaks is still worth a try.
Buy it again?: Maybe.
Purchased: Poundland.
Price: £1.00p each.