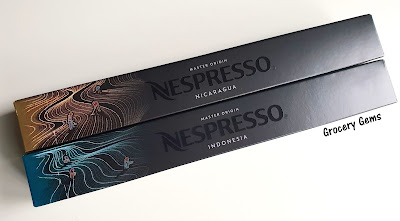 A quick review of two varieties from the new Nespresso Master Origin range - Nicaragua and Indonesia. There are also varieties from Ethiopia, Colombia, India and Mexico available (although the last one only seems to be available for the newer Vertuo machines). 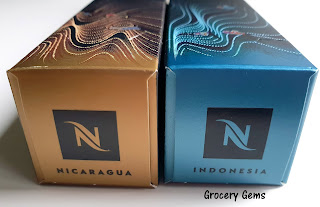 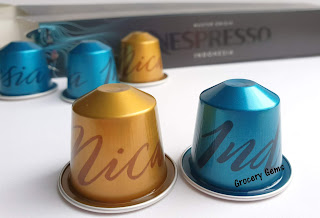 Nicaragua: The Nicaragua Master Origin has an intensity of 5 and is described as possessing a 'smooth honeyed texture with sweet cereal notes'. I found it to have a pleasing initial crema and  a sweet, mild flavour. Disappointingly the flavour seemed to get weaker as I was drinking it and I'm not sure that this packs enough punch for my tastes.

Indonesia: The Indonesian blend on the other hand has a fuller flavour and more distinctive profile. I preferred this stronger blend with it's slight hint of bitterness. It's described as being 'velvety thick, wildly aromatic with notes of cured tobacco'.  The first thought I had when I tried it (and before I read the description) was that it had a slightly smokey undertone. It's certainly unique and, although I enjoyed it, I don't think either of these coffees are going to make it onto my regular Nespresso orders.

I'm still keen to try the other varieties in this range, especially India, which has an intensity rating of 11. Let me know what you thought of the Master Origins range and whether you'll be missing any of the Pure Origins coffees in the comments below.

Posted by Grocery Gems at 15:52 No comments: