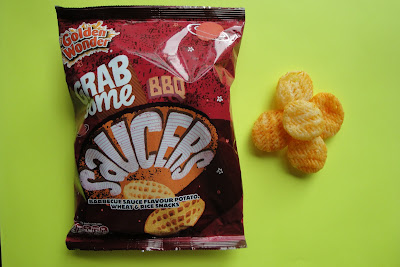 I couldn't resist buying these Golden Wonder BBQ Saucers in a local newsagent. They looked fun in a retro way, reminding me of the cheap crisps that were popular when I was young. I still remember when these kind of "potato snacks" cost 10p a pack, but that's certainly not the case anymore. I bought these Saucers for 58p! Although they do come in a large bag, which is a share-pack really.

I like the design of the pack with the planets and UFO imagery, but I mainly bought these for my eldest son because he loves anything with a "Space" theme. He's also a big fan of BBQ flavours so these were quite a popular find with him. At least I'm not aware of there being any other space-themed-barbeque crisps on the market! 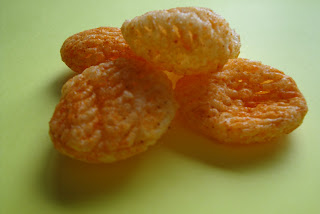 These snacks have quite an unusual shape, my son excitedly described them as being 3d when he opened the pack! That might be stretching it a bit but they are certainly an unusual walnut shaped with a hollow in the middle. Let's face it - they don't really look anything like flying saucers, it's more of an open weave basket look. But the unusual shape was more than enough to intrigue both my kids and make it a very fun product for them.

These Saucers are quite light and easy to eat. They have that melt on the tongue consistency of snacks such as Skips or Wotsits, rather than the hard crunch of crisps. They are also loaded with the BBQ flavouring. It's a very sweet flavouring with a slight tangy note as an aftertaste. My kids loved these and I'm sure they would be popular with adults too. I certainly ate more than my fair share of them. The bag says to "Grab Some" and I certainly would do if I saw them again!