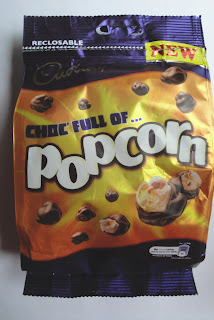 Cadbury's Choc Full of Popcorn was released to much excitement amongst food and chocolate reviewers, me included, a few months ago. It's easy to see why we were all so excited, there is nothing else like it out there and from Cadbury's no less. 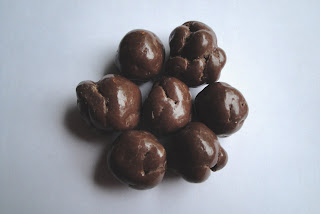 These Cadbury's Choc Full Of Popcorn come in 130g bags which are ideal for sharing. Cadbury's have obviously seen these types of bags as the new way forward as they have released a fair few of them recently. The first thing I noticed about these new popcorn pieces is that the chocolate is quite shiny and dark. It doesn't look like the Cadbury's Dairy Milk chocolate I was expecting. I have no idea why Cadbury's didn't use their most famous chocolate, maybe it was too susceptible to getting damaged in the bag or sticking together. Whatever the reason the chocolate they have used is less creamy and harder than I would have liked. It reminds me of the kind of chocolate that covers Poppets raisins. It's not bad but just not what I was expecting from Cadbury's. 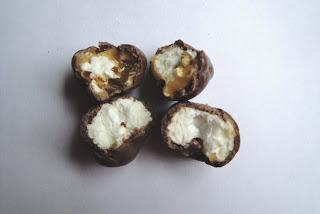 The actual pieces of popcorn were quite big and I was impressed by how fluffy and soft the insides were. The only downside for me was the fact that the popcorn used was already covered in toffee. As much as I like toffee popcorn in itself I don't particularly want it to also be covered in chocolate. The toffee is quite hard and brittle and the whole thing is just a sugar overload with all the flavours cancelling each other out.

I know I'm probably on my own with this review (although no one in my family liked them either), as the majority of reviews out there are very positive. I just would have preferred to see a chocolate covered popcorn without the hard layer of toffee in between. I definitely won't be buying these again because we didn't even finish the bag we did buy!

It's taken me ages to finally get around to posting this review. So long in fact that Cadbury's have since introduced a new product into this range called Choc Full of Pretzels. Unsurprisingly these are pretzels covered with Cadbury's chocolate. I won't be able to resist buying these if I see them on offer but I'm not as excited as I was since trying the popcorn.

So now the question is: what will Cadbury's be covering in chocolate next??