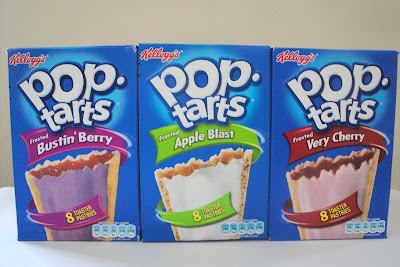 I first heard of this new range of UK Kellogg's Pop Tarts from a tweeted picture by Lot o' Choc. It was enough to have me heading to Asda the very next day. Up until this point the only Pop-Tarts regularly sold in UK supermarkets have been the plain chocolate or strawberry. Compared to the awesome flavours that are regularly released in the US, these are woeful. I usually don't bother buying the UK Pop Tarts, preferring to get the US imports. I mean just look at these new Limited Edition US Pop Tarts: Marshmallow Hot Chocolate, Pumpkin Pie, Spookylicious. Then there is also the new Confetti Cupcakes Pop Tarts, US only of course. All we get here is chocolate and strawberry, no fair.

Finally here's a new range of Pop Tarts for the UK for us to get our teeth into, with new flavours called Apple Blast, Burstin' Berry and Very Cherry. These are still following a fairly traditional unadventurous fruity palate for the UK market. I'd like to see flavours similar to the US but these will have to do for now!

I don't buy Pop Tarts very often. In fact I'm not even a big fan of them to eat myself. It's more my hubby and kids that love these toaster pastries. They are great to serve up on a lazy weekend morning, especially when sharing the different flavours. It's a rare but fun occurence!

In case you've never tried a Pop Tart before they come in sealed foil bags which contain two Pop Tart pastries in each bag. To warm them up you simply pop the tart into your toaster on the lowest setting. Ready to eat, simple as that.

Since it's the weekend and the kids don't have to go to school (I wouldn't send my kids to school after this sugar overload!) we decided to toast up a batch of one each of these new Pop Tarts. Everyone was quite excited by the Apple Blast, it seemed quite different from the usual Pop Tarts. It has a lovely apple smell as soon as it comes out of the wrapper. The outside of the pastry has pale green frosting. The frosting is not as thick as it looks on the packaging, which is probably just as well because it is super sweet and sugary. Inside the pastry is a jam like apple filling. It's very sweet and fruity. I needed to have a strong cup of coffee in order to combat the sweetness of these but they are very tasty. It's like having a slice of apple pie in biscuit form.

The Burstin' Berry is the most colourful of the three. It has a bright purple frosting and inside the fruit filling is quite dark. I'm not sure what fruit it's supposed to be as it's just described as "berry flavour". The ingredients don't mention any fruit apart from apple which is quite scary! The flavour to me was most reminiscent of blueberries and these would be good for any blueberry muffin fans. 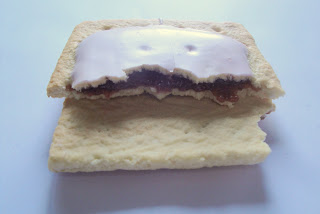 The Very Cherry was a bit disappointing. There was nothing bad about the flavour but they just didn't taste strongly enough of cherry. If I had been told they were strawberry then I would have believed it. Cherry is quite a hard taste to get right because if it is too strong it can taste synthetic and medicinal. Here it is the opposite and has ended up a bit underwhelming. My husband really enjoyed them but I would say our overall favourite was the Apple Blast. I would probably buy those again but for the moment we are all pop tarted out!

These packs cost £2 each from Asda for 8 pastries (there are four foil bags with two tarts in each). If you are on a diet then look away now! Each individual Pop Tart has a gut-busting 200 calories. It might not sound a lot but if you open a foil bag then you will probably eat both the pop tarts that are inside. That would be a massive 400 calories, more than some chocolate bars. These are certainly indulgent but I'm sure no one buys Pop Tarts for a healthy treat!

So what's your favourite Pop Tart of all time? Mine is the Cinnamon Roll!