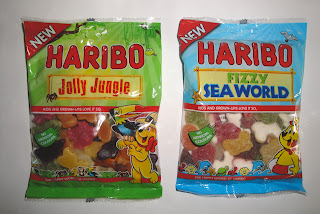 I spotted these Haribo Jolly Jungle and Fizzy Sea World in an Aldi supermarket for £1 each and I've never seen them for sale anywhere else. I have no idea if they are actually new or one of those products that says "new" but has been around for ages.


The Jolly Jungle sweets are quite different from the usual Haribo mix. They don't have any white foam backing for a start. Most of them have the same consistency as Jelly Babies, a slightly harder exterior with a jelly interior. Because of this they were a real novelty and we all enjoyed them. There is a good selection of flavours and colours. I was slightly disappointed by the actual jungle shapes. The animals featured are monkeys, crocodiles, parrots, snakes and tarantulas. The monkeys are quite cute but there were far too many tarantulas in the pack for my liking!


But the real reason I bought these sweets were for the Sea World variety. My eldest son used to be obsessed with all things aquatic, especially starfish, after a trip to Sea Life when he was a toddler. All he wanted for his 3rd birthday (a few years ago now) was a starfish cuddly toy and a starfish shaped cake!

I wish this Fizzy Sea World mix had been around at that time because I'm sure my son would have loved it. There were not many starfish in the bag but they were still the most popular with the kids. The fizzy flavours are not actually sour at all. They are very sweet, with a sugary coating.


I won't be buying them again but only because with Haribo it won't be long before the next "New" variety comes along.