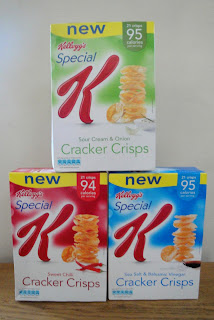 I was really pleased to be offered the chance to try the new Kellogg's Special K Cracker Crisps before they hit the shops at the end of September. They come in three great sounding but basic flavours; Sea Salt & Balsamic Vinegar, Sour Cream & Chive and Sweet Chilli. There is something for everyone with these flavours and it seems like an easy way to enjoy a tasty snack whilst sticking to a healthy diet. They all have 95 calories and only 2g of fat (0.3g of saturated fat) per serving. Crisps without the guilt!


I wasn't expecting the cracker crisps to come in boxes but I think these look really cute. They are about half the size of a normal box of cereal, each one holding 100g of Cracker Crisps. The package says to eat 21 crisps for a 95 calorie portion. The crisps are quite large so that feels like a generous sized portion. I would say these boxes are ideal for sharing, a great substitute for higher calorific bags of crisps that you might share on a night in. These Special K Cracker Crisps will also be available in individual bags which might be better option if portion control is an issue. 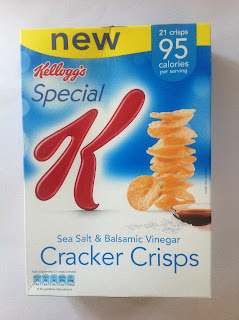 I decided to try the Sea Salt & Balsamic Vinegar first as this flavour was the most appealing to me. The texture was quite different, they are not as hard as crackers nor are they the same as most crisps, they certainly don't have any of the greasiness. They are similar to other baked potato snacks, such as Pom-Bear crisps but with more of a crunch. The Sea Salt & Balsamic Vinegar has a decent  salt taste even though they are quite low in sodium compared with other crisps. The vinegar is tangy but also has a lovely sweetness. I must admit I didn't count out a 21 cracker portion and they were quite hard to stop eating. I could happily have snacked on these without stopping! They were easily my favourite out of the three flavours. 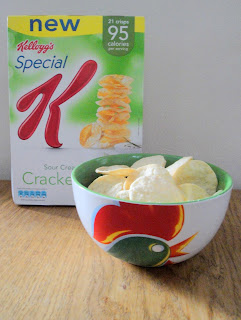 The Sour Cream & Chive flavour is a bit of an odd one for me. I have to say that I didn't really like the flavouring. It has a very milky aftertaste which is not like the usual sour cream flavoured crisp. I don't like the taste of milk so these are not crisps that I could enjoy. It's a shame because I usually love any Sour Cream & Chive flavour crisps. My husband tried these as well and he agreed they had a milky taste to them, and although he didn't mind the taste they weren't his favourite either. 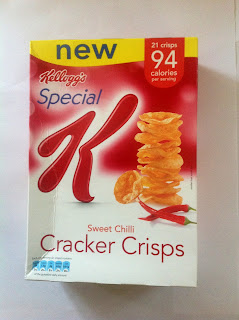 The Sweet Chilli variety however was much tastier and we all enjoyed them. The flavouring is quite strong on these ones and they have a distinctive red colouring. There are plenty of spicy flavours with the ingredients containing many spices such as; chilli pepper, sweet chilli seasoning, cumin powder, coriander powder and red bell pepper. They have quite a strong taste of pepper and they are not as sweet as other sweet chilli crisps on the market. I can imagine that these would be fantastic with a salsa dip. In fact I think all of them would be great for dipping.

It's great to see Kellogg's releasing another product in the UK which has also been launched in the US (they are known as Special K Cracker Chips over there). I'm sure these will be very popular here in the UK. They are available in two packages: an individual bag or the boxes of crisps. I already buy the Special K cereal bars for when I am out and about and I'm glad there is now a savoury snack option. I'll definitely be buying the Sea Salt & Malt Vinegar variety.

Special K Cracker Crisps will be available in the crisps aisle in all major supermarkets from the end of September 2012. The priced 100g box will be priced at £1.99 and the individual bags for 60p.

I received these boxes of Special K Cracker Crisps in order to write an honest review and all opinions are my own .