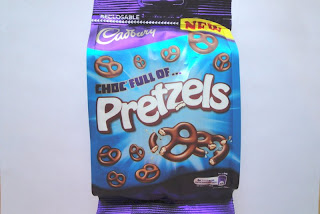 I had been a bit disappointed by the taste of Cadbury's Choc Full of Popcorn so I told myself I wasn't going to buy the new Choc Full of Pretzels. But I found I just couldn't resist when faced with this gorgeous little bag of Pretzel treats. Even worse, I actually spent £2.69 on one 110g bag, which seems quite expensive. These are the sort of snack bags that usually cost £1 or thereabouts. I can't see any reason why this product should cost closer to £3. Not for the first time I found myself cursing Tesco's and my own inability to resist a new product. 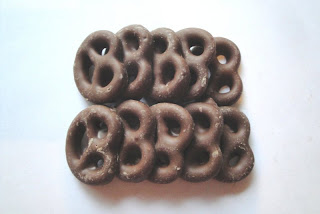 Thankfully these Choc Full Of Pretzels were a lot tastier than the Popcorn variety. They looked good when I first opened the bag. I had been half expecting to see a messy lump of stuck together pretzels. Although they did have a slightly bashed together look, which mostly affected the colour of the chocolate, I was happy to find that hardly any of them were broken or misshapen. The pretzels were also much smaller than I imagined which meant the bag contained quite a generous amount.

The chocolate coating consists of classic Cadbury's milk chocolate. It had a deep brown matte colour and I was pleased to see that it was not the shiny stuff that covered the Choc Full Of Popcorn. However the chocolate coating was notably quite thin which was disappointing. I definitely would have preferred a thicker layer of chocolate on this snack. 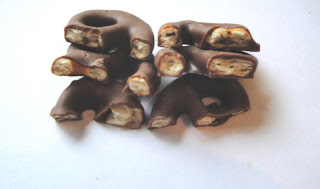 Surprisingly the strongest flavour in these pretzels is a generic biscuit taste. I didn't tell my husband what these were (or let him see the shape) and he thought they were some kind of rich tea biscuit with chocolate! That's not to say they don't taste of pretzel. They do have a subtle pretzel flavour but it's quite a sweet taste that is lacking in saltiness. Maybe I've got the wrong idea about pretzels but I expect them to be quite salty. Even when they are covered in chocolate I still want them to have a salty edge. There is the occasionaly hit of salt in this product but it is not consistent. I personally love the whole sweet/salty combos that are popular in America but I imagine that Cadbury's wanted to tone down that aspect to make it more palatable for the UK market.

Even so I did like the Choc Full Of Pretzels, they make an enjoyable treat. They are extremely moreish and tasty, albeit in a biscuity rather than pretzely way. The lack of salty pretzel flavour makes them easier for the whole family to enjoy. My kids enjoyed them a lot especially because of the biscuity flavour. Unlike the Choc Full Of Popcorn, which we couldn't even finish, the Choc Full Of Pretzels did not last very long in my house! I will definitely be buying them again, partly because I have an idea to make some chocolate cupcakes with these pretzels as a decoration on top!

Many people will be comparing Choc Full Of Pretzels to the already established chocolate pretzels brand Flipz. I have never tried Flipz before (a situation that I am trying to amend!) so I obviously can't compare them yet. All I can say is how pleased I am that Cadbury's have brought such a novel product to their brand.

Don't stop now Cadbury's, I'd like to see more in this "Choc Full Of" range!