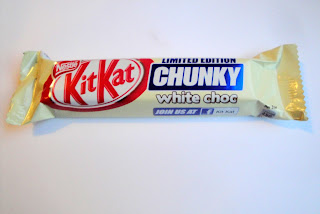 A quick review today because white chocolate Kit Kat Chunky's are hardly a new invention. These were originally released, in the UK at least, as part of a campaign to find the favourite of four new Kit Kat Chunky varieties (the White Chocolate came second after the Peanut Butter version). When I saw this new Kit Kat Chunky White Choc in a local shop a few days ago I could tell it was a newer release. The packaging is slightly different and now has the words "Limited Edition" rather than the word "New". Also gone is the 'Choose a Chunky Champion" logo which the whole packaging looks much better without.

According to a recent post on the Kit Kat Facebook page the White Choc Chunky's have been released for "a limited time", so if white chocolate is your favourite it's time to stock up! The same page says these will be released from next week but I managed to find some in my local Premier store (which is fast becoming one of my favourite places!). 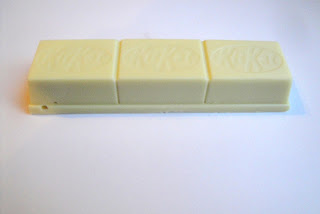 The white chocolate Kit Kat Chunky is very tasty and a real treat for any white chocolate fans. Even though the white chocolate used here is not the finest in the world it is not without it's merits. I love it's creamy, almost milky, taste. There is a sweet vanilla flavour to it which is always welcome to my taste buds. You need to have a fairly sweet tooth to tackle this bar but I don't find it as cloying or overly sweet as some other chocolates. Although maybe that's because I only ate one chunk of it. Note to self: don't open white chocolate products whilst in the same room as the children! 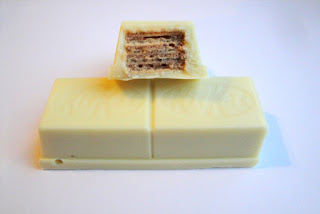 I'm guessing that Kit Kat have re-released this white chocolate version because it was a big seller for them last time round. I'm certainly glad that it's back. In the extremely unlikely event that any bigwig from Kit Kat reads this review, here's a message - can you please bring a white chocolate & coconut Kit Kat Chunky to the UK. I thank you.

What do you think of the limited re-release of the white chocolate Kit Kat Chunky? Any suggestions for new Kit Kat Chunky varieties?