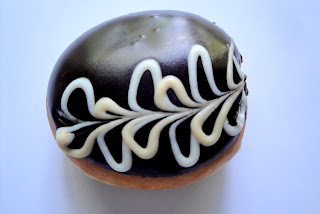 When I heard about this new Salted Caramel doughnut by Krispy Kreme I knew I wouldn't be able to resist giving it a try. My local Tesco's has a Krispy Kreme cabinet so I didn't think it would be too hard for me to get my hands on one. Unfortunately Tesco didn't have them and I was quite disappointed. Luckily for me I just happened *cough* to find myself at a branch of Krispy Kreme in central London and I decided it would be rude not the give the new doughnuts a try.

Krispy Kreme's autumn collection, which features three new doughnuts, is called "Kreme de la Kreme", and it's easy to see why. The doughnuts have a sophisticated design and quite ambitious flavour combinations. Salted Caramel is a very popular and trendy flavour at the moment and has almost become a national obsession. It seems such an obvious choice to put it in a doughnut that I'm surprised it hasn't been done before. 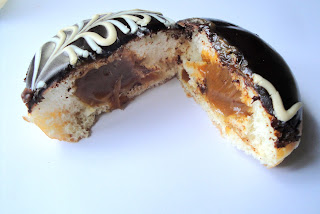 As I cut the doughnut in half I was met with an extremely generous amount of caramel filling with a pleasing rich auburn colour. I couldn't resist a quick taste of the caramel before biting into the doughnut itself. It's just the kind of caramel I love, full of dulce de leche creaminess. There is no burnt taste that you often get with caramel, just a lovely smooth and creamy sweetness. This is wonderfully offset by the subtle saltiness which kicks in just as the caramel is starting to melt in your mouth. I have to admit that I haven't had too many salted caramel products in the past but if they are half as delicious as this then I am a convert. I think Krispy Kreme have got the level of salt just right, it's not overly salted but neither is it bland. I'm not always a fan of Krispy Kreme's filled doughnuts, I usually prefer the original glazed doughnut, but this Salted Caramel filling is the best I've ever tried from them. 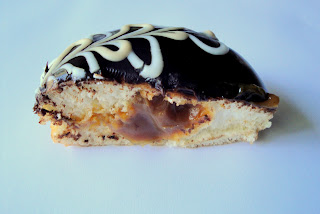 The actual doughnut part tastes the same as any Krispy Kreme. It is much lighter in texture than a usual doughnut, especially the supermarket ones which are so heavy they taste like deep fried bread dipped in sugar. The Krispy Kreme doughnuts have a melt in the mouth lightness and this Salted Caramel one is no different. It seems to disappear all too quickly! 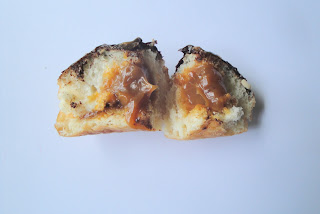 The one part I assumed would ruin the overall flavour was the chocolate coating on top. I have never liked any chocolate doughnut from Krispy Kreme before. They usually have an awful chocolate icing on top which can barely be described as chocolate. It's more like a brown coloured icing that tastes cheap and gritty. Thankfully this chocolate covering on the Salted Caramel is completely different. It's described as "Belgian dark chocolate icing" and I was pleased to find that it has an intense dark chocolate flavour. It complements the sweet and salty filling perfectly. It's certainly a step up from the usual Krispy Kreme chocolate offering.

The other two varieties in the new range are; Chocolate Praline Fudge cake (top right in my photo), a must for chocolate lovers, and the extravagant sounding Pistachio & White Chocolate Nougat (top left). A full review of these will be coming up soon!

If you've tried any of these new doughnuts (or can't wait to try them!) then please add to this review by leaving your comments below.