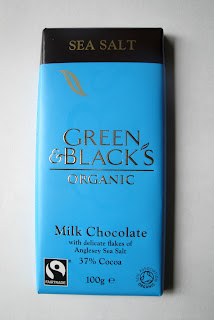 Green & Black's was one of the first premium brands of chocolate I ever tried. I remember my friend raving about this new chocolate and buying several bars for us to eat. We were both wide eyed in wonder at the fact that it was organic, it seemed so "wow" at the time! I was hooked from that point on and I tried all the Green & Black's bars available and would even buy the Green & Black's Ice Cream and Easter Eggs. But how times have changed. I genuinely can't remember the last time I bought a bar of Green & Black's but it has been a long time. It's a brand that has totally slipped off my radar. 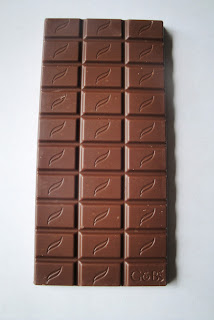 The Green & Black's Organic Sea Salt Milk Chocolate comes in the same 100g format as usual for Green & Black's. The packaging fits into the rest of the range in a nice, if a bit uninspiring way. The ingredients listed are very good and most of them are organic and Fairtrade. There are no science-fiction sounding chemical ingredients. It's described as "Organic Milk Chocolate with Anglesey Sea Salt" and contains Raw Cane Sugar, Whole Milk Powder, Cocoa Mass, Cocoa Butter, Anglesey Sea Salt (0.7%), Emulsifier and Vanilla Extract. 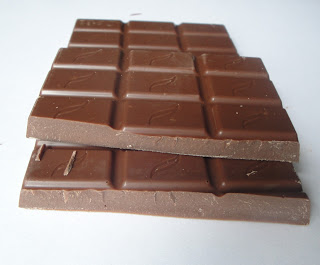 Inside the wrapper the bar looks the same as I remember from Green & Black's, with quite small pieces of chocolate that are not sectioned very deeply. When trying to break off a chunk it often breaks haphazardly in the middle of chunks rather than breaking off cleanly. There was no obvious evidence of the inclusion of Sea Salt in any of the pieces of chocolate, even when looking very closely at it. However when biting into the chocolate I could feel the pieces of sea salt on my tongue with their slightly gritty texture. The milk chocolate has quite a strong cocoa taste for it's 37% cocoa content. It also has a lovely almost buttery like melt in the mouth which is similar to the other Green & Black's bars I've tried. The sea salt pieces give quite an uneven hit of salty taste  and some pieces of the chocolate are much saltier than others. However, where you do get a burst of salt it really enhances the flavour of the chocolate. It makes it an intense chocolate to eat and I couldn't take too much of it in one sitting. In fact I only ate a couple of chunks before I put it away.

It's strange because even though I usually love sweet and salty combinations I didn't enjoy the combination in this bar. I think it has been fairly well executed but it's just not for me. I wouldn't buy this bar again and I'm not inclined to try the Spiced Chilli version either. However I did go on to buy the Green & Black's Crispy Milk Chocolate which is a fairly new bar and we all loved that one! These new bars have helped rekindle my interest in the Green & Black's brand and I'm looking forward to what they come up with next.

Leave a comment, I'd love to hear what you think about these new bars and whether you have bought any Green & Black's Chocolate recently.

Email ThisBlogThis!Share to TwitterShare to FacebookShare to Pinterest
Labels: Chocolate