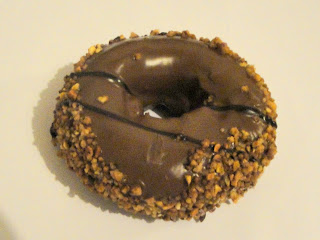 Even though I had hotfooted it to Krispy Kreme purely to try their new Salted Caramel doughnut I also couldn't resist buying the other two new doughnuts in this range. I officially have no self-control when it comes to doughnuts.

To be fair the Chocolate Praline Fudge Cake doughnut (is it a cake or a doughnut?) looked delicious and quite irresistible. The doughnut is covered in a rich milk chocolate with golden coloured nuts around the edge. Underneath all that lovely chocolate coating the actual doughnut is not the usual Krispy Kreme but one of their denser chocolate doughnuts. 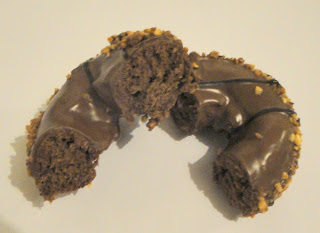 I hadn't actually read the description of this doughnut online but judging by it's name I was expecting it to taste like a chocolate fudge cake with some nuts on it. I haven't liked many of Krispy Kreme's chocolate doughnuts in the past so I thought this would be vastly inferior to the new Salted Caramel doughnut. I'm happy to admit I was completely wrong in my assumption that the Chocolate Praline Fudge Cake would taste of chocolate fudge cake. Silly me.

Instead I would like you to imagine Nutella in the form of a doughnut. Imagine that the lightly chocolate flavoured doughnut is covered in a rich hazelnut chocolate, with added hazelnut praline pieces along the edges. Congratulations you have now imagined exactly what the Chocolate Praline Fudge Cake tastes like and it's just as delicious as it sounds. 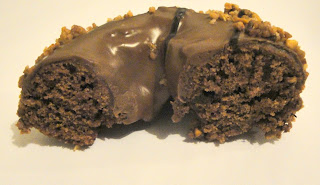 If I had read the description of this doughnut online then all would have been revealed sooner. It's described as "covered in a rich milk chocolate hazelnut sauce, hand rolled in caramelised hazelnuts and drizzled with dark chocolate icing". The clue to the Nutella taste is in the word hazelnut. I'm still not sure how this is the same as a fudge cake but I'll forgive Krispy Kreme because this doughnut is friggin' gorgeous. I might even have preferred it to the Salted Caramel doughnut - sssh don't tell anyone!

Would I buy this doughnut again? Hell yes, and just try to stop me. I almost don't want to know if my local Tesco starts to stock these because then I will find myself nipping out for "milk" quite regularly.

The same cannot be said for the third and final new doughnut from Krispy Kreme, the Pistachio & White Chocolate Nougat. It's not that I had high hopes for this doughnut. In fact I went against all my inner feelings, based on what it looked like, and just bought it because it's new. I do that quite a lot. 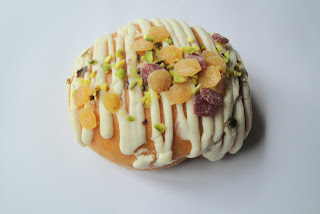 Now there might be some people that would look at this doughnut and think "ooh that looks nice" but I'm not one of them. It just looks a bit busy and almost chintzy. If Laura Ashley made doughnuts this is how they would look. The doughnut is lavishly decorated, almost with abandon, with a variety of toppings. It looks like a veritable fruit and nut basket atop a doughnut. 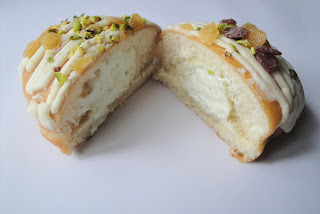 Inside there is what Krispy Kreme describe as a "smooth pistachio praline Kreme". It has a nice pale green colour but that's the best thing I can say about how it looks. Although in the end the look of this doughnut turned out to be the best thing about it.

The fruity bits on top are actually "honey and raspberry flakes" which have an oddly slimy and sticky texture. They are tangy and fruity but are not something that I would want to eat again. The white chocolate drizzle doesn't taste of chocolate at all. If it hadn't been described as white chocolate I would never have guessed it from the taste. It's simply a sugary icing, that's it. Even the pistachio pieces on top of the doughnut are disappointing and don't have much flavour. Similarly, the inner pistachio cream doesn't taste of pistachio, it's just a very sweet creamy, quite bland filling. There is very little taste to it at all. Maybe I tried one from a bad batch but there was nothing about this doughnut that lived up to it's name. It doesn't taste of white chocolate, nor pistachio and where the word "nougat" fits into all this completely baffles me.

I don't want to leave this on a negative note though, the other two doughnuts in this new range are delicious - so two out of three being doughnut perfection is not bad at all! If you've tried any of these doughnuts then let me know how you got on. If not, which one would you choose?

You may also be interested in:
New Krispy Kreme Salted Caramel Doughnut