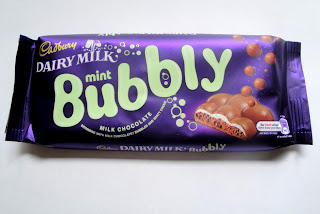 Cadbury's have been on a bit of a Dairy Milk bender recently with the release of the new Toffee Popcorn and Golden Biscuit varieties, not to mention the three new Olympic themed bars before that. Yesterday they announced another new Dairy Milk bar; the Mint Bubbly, but let's face it a new Dairy Milk bar is always a source of great excitement. 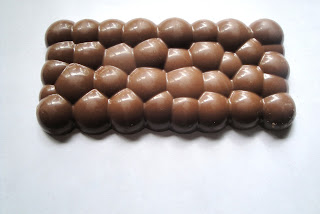 A Cadbury's Mint Bubbly has already been produced before as part of an Australian only range. This had quite a lurid green aerated filling akin to an Aero Mint. This new incarnation of the Dairy Milk Mint Bubbly looks much more sophisticated and tempting. Gone is the off putting bright green filling. Instead there is a layer of mint creme which mainly resides inside the top bubbles. The aerated chocolate below looks much better with it's brown colouring, rather than green, reflecting the fact that the actual chocolate is not mint flavoured. The mint flavour is all in the cream layer. 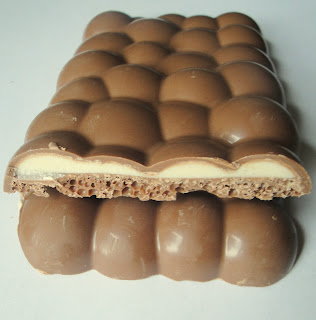 I have a love/hate relationships with mint chocolate bars. I used to love the Aero Mint when I was at University, I swear I used to live on the things. Not the greatest diet in the world for cerebral health. Then I just went off them and my tastebuds completely changed. As I've got older my tastes have veered more towards coconut and vanilla flavours. Well, the Dairy Milk Mint Bubbly has put me firmly back on the mint wagon. The flavour builds up so perfectly, it's a wonderful chocolate experience.

Firstly and unexpectedly it's not the mint flavour that I could taste first; it's the creamy Dairy Milk Bubbly chocolate which is very light and just melted in the mouth. Only after the smooth chocolate taste did I taste a mild mint flavour which then built up to a peppermint crescendo. Every mouthful was the same; rich chocolate taste, then creamy mint taste, then finally peppermint taste. It leaves such a refreshing flavour and feeling in the mouth that it kept me going back for more. This is undoubtedly because of the way this chocolate bar has been layered. The aerated chocolate at the bottom melts first giving you the wonderful chocolate taste, whilst the mint layer takes a bit longer to break down but dominates in the end. 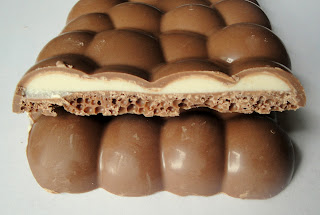 I bought the Dairy Milk Mint Bubbly yesterday from Sainsbury's for £1.39. Then today I saw them piled up high in Poundland... so I bought another one.

Any thoughts on the new Dairy Milk Mint Bubbly?

You may also be interested in:
Cadbury's Dairy Milk with Oreo
Cadbury's Crunchy Spiders
Posted by Grocery Gems at 14:56