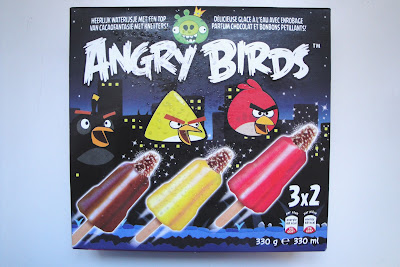 If you know your Apps from your Candy Apps then you'll probably know about the new Angry Birds game out today called Bad Piggies. Since I live with three gaming addicts I've heard quite a bit about it, non stop for the last few weeks, on and on. You could say my kids are quite excited about it.

I' d like to be able to tell you that I bought these Angry Birds Ice Lollies in a UK supermarket but alas this is another product I bought on holiday in Portugal. Although not as awesome as the Pirulo Jungly, these Angry Birds lollies were still very exciting. I'm always on the lookout for gaming related food or sweets but they are frustratingly rare. I recently tried the US Angry Birds sweets but they were beyond awful. I couldn't even bring myself to post a review because they were that bad. 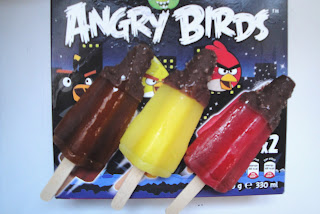 These angry birds ice lollies on the other hand are pretty awesome. OK, maybe the best part is the actual box and branding. Those three Angry Birds flying across a generic city skyline at night look like they are ready for action. Inside the box there are three types of ice lolly; cola, lemon and strawberry. Each one is topped with a chocolate layer embedded with popping candy. My son was quick to point out that the lollies are not shaped like an actual Angry Bird. I think he expected a fully carved anatomically precise Angry Bird ice lolly for the € 2,99 we paid. Sorry son but these ice lollies are just a basic rocket shape, but on the bright side, at least they've matched the colours up to the Angry Birds on the box. Of course in the end neither of my kids were disappointed with these ice lollies. They now refer to them in a misty eyed "do you remember those amazing Angry Birds ice lollies?" kind of way.

Yet again I find myself asking, why aren't these available in the UK? I think they would be huge sellers. Don't companies know by now that we Brits like to eat ice cream in all weathers? Even rainy, cold and miserable countries deserve magnificent ice lollies!

I bought these from a supermarket called Continente. I'm afraid I have no idea who the maker is, it was hard enough taking a photo of them before the kids/hubby/me scoffed the lot.