Candy Apps by Au'some: Who needs an iPhone 5?


PLEASE DO NOT adjust your monitor/mobile device/iPad. What you are looking at on the right is not an iPhone 5, or even a prototype of the iPhone 6. It's a beyond awesome looking candy called Candy Apps. The company that makes the Candy Apps is so awesome it's even called Au'some! The word "awesome" wasn't enough, they had to misspell it to make it even more awesome. 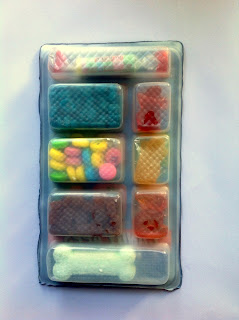 Yes it's true, they are now making mobile phone application inspired candy. I just don't know why it took 5 versions of the iPhone before somebody came up with this stroke of genius.

Now, I'll admit it, I don't own a smart phone. My mobile phone is so old it does not take pictures or have internet access. I still have to use the number keys to type out my text messages. My husband bought me an iPad recently but I can't figure out how to use it because it doesn't have any buttons. But now the awesome Au'Some Candy App sweets are in my life, I have everything I need!

Unfortunately there is no touch screen, the candy will not appear if you jab at the "screen", you have to peel back the plastic front cover in order to reveal the sweets beneath. That's where the awesomeness starts to drift into averageness. And when I write "drifts" I actually mean "plummets". There are 8 compartments, containing a variety of violently colourful and oddly named candy; 3-DEES gummies, Mega Bitz, Crunchy Candies, Sour 3-Dees Gummy, Candy Roll, Au'some Nuggets and even a bizarre large Sour Candy Bone. Why a bone? The emoticons I understand, they match the App theme. But a bone? The sweets are not very tasty either, unless the thought of highly artificially coloured and flavoured candy makes your mouth water. 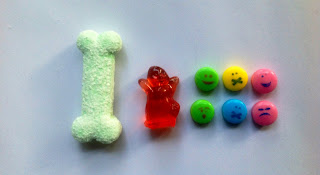 You should give Candy Apps a try if you find them. I bought them from a 99p Store. They make an amusing gift for the Apple obsessive in your life and are cheaper than an iPhone 5. However, once the 10 seconds of amusement have passed, your Apple obsessed friend will realise that these Candy Apps are not Au'some, just Au'verage.

Leave a comment, I'd love your thoughts on these!