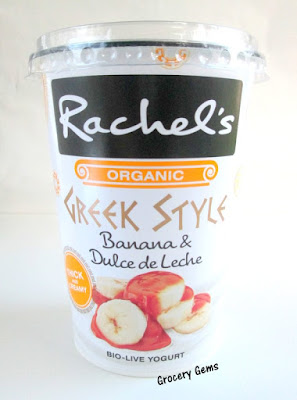 Rachel's Organic have recently launched a delicious new Greek Style Banana & Dulce de Leche yogurt. It's an indulgent tasting treat, perfect as an after dinner dessert, and is made with organic ingredients and fruit. There's also a new range of 0% Fat Greek Style Yogurts in three flavours; Blueberry, Peach & Passion Fruit and a Lemon & Ginger. These fruity flavours are all made with 0% fat organic yogurt with no artificial colourings, flavours or preservatives. 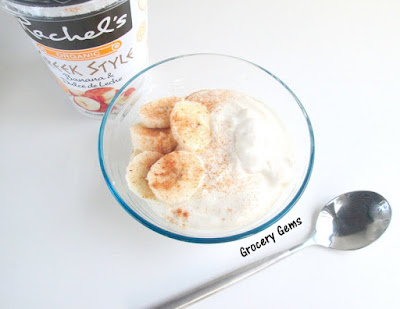 Rachel's Organic Greek Style Banana & Dulce de Leche: This yogurt flavour is so appealing to me - it's just a dream combination. I love banana yogurts (and ice icream!) but I've never had it paired with Dulce de Leche - the gorgeously buttery caramelised sauce from South America. As expected, the combination is just divine in a yogurt, with a deliciously fruity banana taste and a sweet and mellow caramel flavour. The consistency of the yogurt is just wonderful too, it's super creamy and thick, with extra texture from the addition of small banana pieces. I've been enjoying this yogurt with some sliced banana and cinnamon and it makes a really delicious, dessert-tasting treat. 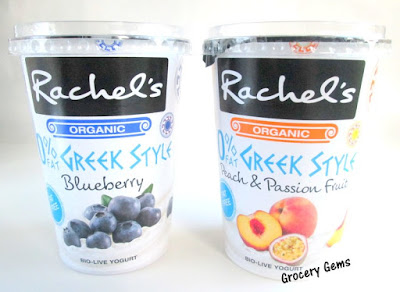 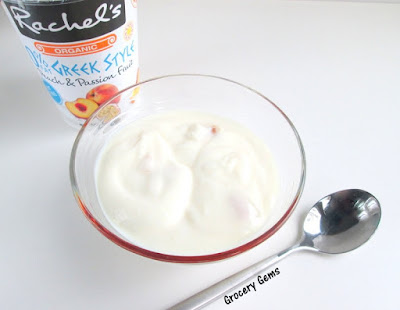 Rachel's Organic 0% Fat Greek Style Peach & Passion Fruit: This has a surprisingly creamy texture and flavour for a fat free yogurt. The fruity flavour is very peachy but with a tropical twist from the passion fruit. It's a classic yogurt flavour but it works wonderfully with the creamy organic yogurt base. This flavour is especially delicious and filling in the morning with granola or cereal instead of milk. 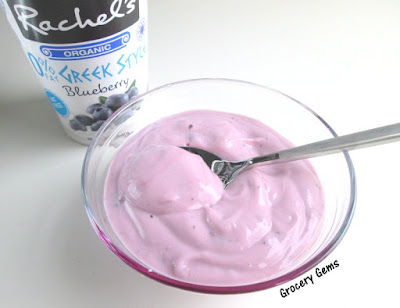 Rachel's Organic 0% Fat Greek Style Blueberry: This yogurt is filled with small blueberry pieces and has the same creamy texture as the Peach & Passion Fruit (although neither is as thick as the Banana & Dulce de Leche!). Blueberry is not a yogurt flavour I usually go for but it's one of Mr. Grocery Gems favourites and he really enjoyed this one. The flavour was spot on for him, very fruity and not overly sweet.

Overall, I'll definitely be buying these new Greek Style Yogurts from Rachel's Organic again in the future. The whole family enjoyed the different fruity flavours and creamy textures. The Greek Style Banana & Dulce de Leche is my favourite in terms of flavour but I would probably buy the 0% Fat Greek Style yogurts more often as a healthier breakfast alternative.