Around The World Latvia - Biscuits & Chocolate! 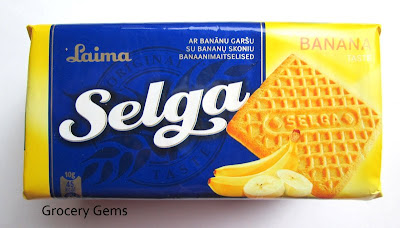 I bought two products recently from a local grocery store that both turned out to be from Latvia - and both utterly fab too! Firstly these Banana Selga biscuits by Laima, a company that has been making chocolate and biscuits since 1870. These came in absolutely loads of different flavours, and somewhat predictably I went for the banana! I recommend looking out for this extensive range - some of the other biscuit flavours I spotted were; Strawberry, Maple Syrup, Irish Cream, and Apple. 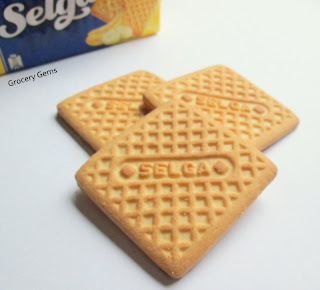 The biscuits have a lovely golden look and design but what really caught my attention was the sweet banana smell! It was like someone had just poured a glass of banana milkshake. I'll admit that when it comes to products like this I don't want a subtle natural flavour, I want a stronger banana flavour, and these biscuits certainly deliver that! The biscuits themselves are quite buttery, with a good crunch. The strong banana flavour means I wouldn't want to eat these biscuits with a cup of tea - BUT they are fabulous crumbled over some vanilla ice cream!

Next up is the Manija, also from Latvia, but made by Kraft Foods. Like the previous biscuits this came in an impressive array of flavours - Peanut, Hazelnut, Caramel and more. I decided to go for the coconut - even though I was slightly worried that it might be like a Bounty (which I don't like at all). 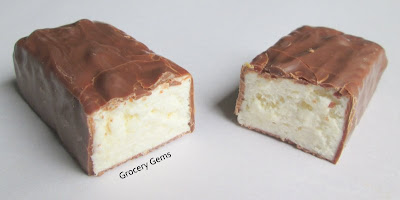 Considering I had no idea what it would be like inside I was very pleasantly surprised. The fluffy white layer is in fact a soft vanilla nougat. It has just the right amount of coconut in it, enough for a decent coconut flavour, but not enough to ruin the soft texture. The chocolate is quite thin and a little bland but it serves it's purpose here well enough providing a sweet cocoa finish. Overall I was very impressed by this bar, there's nothing like it in the UK and it's fantastic for coconut and nougat fans! I'd love to try the other flavours in the range too.