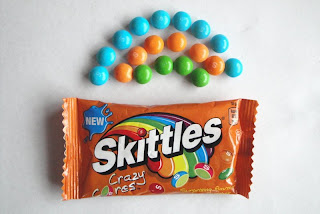 I haven't bought Skittles for many years, not since I was a teenager. These caught my eye in a local newsagents with the bright packaging and of course the magic word NEW written above the logo. My first thought was that they looked like something I would expect to find in a US sweet specialist rather than on the high street and this made them very tempting.  The flavours written on the back looked different too, there is Strawberry Watermelon, Blue Raspberry Lemon, Mango Peach, Melon Berry, and Cherry Lemonade. The idea is that each skittle has two flavours combined, one on the outer shell and a different flavour (and colour) in the core.

The flavours were a bit hit and miss for me. My favourite was the orange one which is Mango and Peach flavour. It was my first choice since I love most things with those flavours and seemed the most interesting flavour of the bunch. It had a nice tropical fruity flavour, although I couldn't really taste any big difference between the mango and the peach parts. My least favourite was the red one (Cherry Lemonade), which vaguely reminded me of cough medicine.The rest were not great either, the Blue Raspberry Lemon flavour also had medicinal undertones and the other two contain Melon which is not a good flavour in these sweets.

The best thing I can say about Skittles Crazy Cores is that they are Vegetarian and Vegan as they do not contain gelatin or E120 (the red dye made from beetles) unlike most sweets of this type. Have you tried these? Let me know whether you liked the 'crazy' flavours!