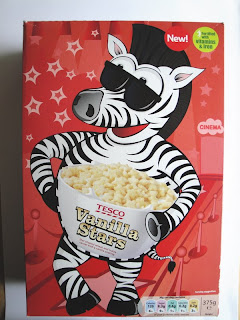 Vanilla Stars, a new children's cereal by Tesco, is described as 'Star shaped wheat and maize cereal with a vanilla coating'. Most of Tesco's own brand cereals for children feature cute critters on the box and this is no different with it's cool zebra.

I am so glad that there is finally a vanilla flavoured cereal for children. My kids are not fans of chocolate cereals as they hate it when the milk goes brown! I know vanilla might seem a boring flavour to some but it is always my children's first choice when asking for ice cream or yoghurt. Most cereals aimed at children seem to be chocolate or honey flavour, neither of which appeal to my kids, so I was keen to see if they would like this one. 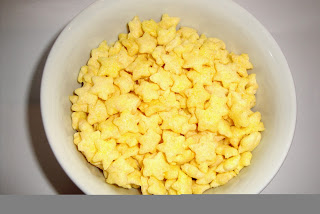 As soon as my kids saw the Vanilla Stars, they couldn't wait to try them. They loved the name and the shapes. The star theme is brilliantly simple, what kid doesn't love stars? The taste was a big hit too, in fact they both asked for seconds. There is quite a strong vanilla flavour to these and the milk turned vanillary too. I will definitely be buying this cereal again and it has made me keen to try the other cereals in the Tesco kids range. Vanilla Stars cost £1.68 for a 375g box and contain added vitamins and iron.