I've been meaning to review this Kit Kat Chunky Caramel for absolutely ages as it's been sitting in my cupboard for far too long. This bar is made by Nestlé Bulgaria and comes in a distinctive yellow wrapper. It's part of a range of Bulgarian Kit Kat Chunky's, which also includes the Kit Kat Chunky Hazelnut Cream and a white chocolate one (which I've yet to try). It might sound strange but these Bulgarian Kit Kats have been available to buy in the UK for a while now, and they even look like they were made here.

Indeed I suspect a lot of people who buy this bar have no idea that it is in fact an imported chocolate. Whereas the front is all in English, the writing on the back of the wrapper is all in the cryllic alphabet, but seriously who would even notice?

Underneath the wrapper it looks identical to our Kit Kat Chunky's, with three clearly defined large segments.

The thick outer chocolate layer smells, and tastes, slightly different to the usual Kit Kat Chunky chocolate. Straight away there is a distinctive butterscotch smell. Butterscotch is made of brown sugar and butter and, to me, always has a slightly burnt edge to it. That's not a negative thing, I like butterscotch, the only problem is, it's definitely not the same thing as caramel. A caramel is made with white sugar, milk/cream, butter and vanilla and has a creamier sweeter flavour. 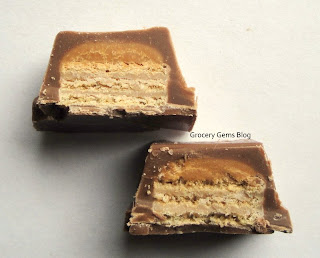 Inside the bar there is also a "caramel" layer, which has a fudge like consistency, rather than a gooey caramel sauce that some might expect. It's similar in texture and look to the cream layer in the Hazelnut and Choc Fudge Kit Kat Chunky's that have been released recently. Again, the flavour is more of butterscotch than caramel, which is a shame as I think a Kit Kat Chunky with a proper layer of soft melty caramel would be quite popular. The overall taste is not bad, I've certainly had worse Kit Kat Chunky's, but it's just far too sweet and cloying. The inner wafer is quite bland and unable to provide any balance of flavour.

Email ThisBlogThis!Share to TwitterShare to FacebookShare to Pinterest
Labels: Around the World, Chocolate, International