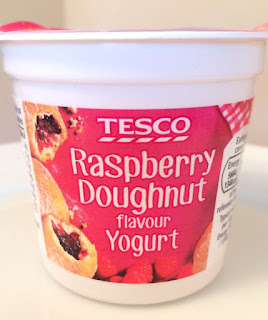 In a recent New Instore round up post I featured the new Tesco Carrot Cake Flavour Yogurt and mentioned that there was also a doughnut flavoured yogurt available in the range. A big thank you to Luci J. who emailed me a photo of this new flavour!


Tesco Raspberry Doughnut Flavour Yogurt: Luci described this one as tasting like a normal raspberry yogurt when eating it but it does have a lovely jam doughnut aftertaste. She still really enjoyed it! I love raspberry so this sounds really good. £0.60p at Tesco. 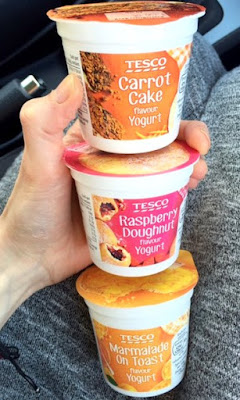 Tesco Marmalade On Toast Flavour Yogurt (bottom of photo): Thanks to Bronagh who sent me a photo of the final yogurt in this range - the Tesco Marmalade On Toast Flavour Yogurt. In fact she's bought the whole trio of yogurts in this range. Has there ever been such a unique range of yogurt flavours? If you've tried a wackier one then I'd love to know what flavour it was! £0.60p at Tesco.

Many thanks again to Luci, and Bronagh, for the great photos and description! Also thank you again to Lucy W. who first told me about this range. If you've spotted any new products instore then I'd love to hear from you - email grocerygems@gmail.com or tweet me @grocerygems.