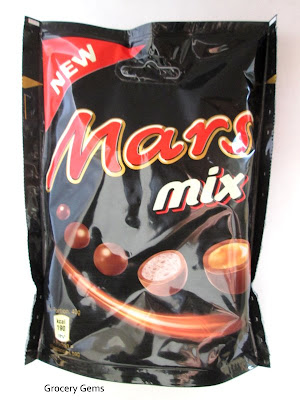 I spotted these "new" Mars Mix in Co-Op and was instantly suspicious that they were one of those old products that's been labelled new when it's not. The truth is - it's not really new. In the bag there are two types of circular chocolates which will give you the "great taste of Mars"- a fluffy nougat and a caramel. This is all very similar to Mars Planets which also featured balls of nougat and caramel, BUT also had a crispy centred chocolate too. 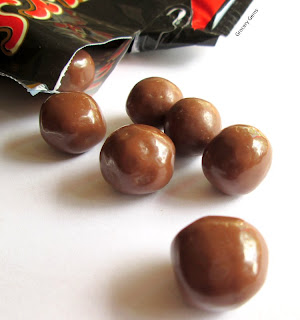 The good thing about Mars Mix is that they really are like eating a Mars bar in a ball format, without the annoying crispy one that served no real purpose. The nougat, caramel and chocolate all taste identical to that found in a real Mars Bar. We took this bag to the cinema at the weekend and everyone enjoyed them (hence the lack of photos!). Of course there is also a major downside to the NEW Mars Mix and that is - we're all getting less for our money. No longer "Soft, Crispy & Chewy", now we just get soft and chewy, and all in a smaller bag too (140g rather than 150g). Strange to call it Mars Mix when there's actually less of a mix.

I'm not sure if Mars Planets will still be available. They're listed on Tesco online as in stock, so perhaps Mars are simply catering for all the "crispy ones" haters out there and providing an alternative bag.

Email ThisBlogThis!Share to TwitterShare to FacebookShare to Pinterest
Labels: Chocolate, Mars, Not So New