A whole selection of Polish goodies for you today courtesy of @Banjo_Chocolate. There are two chocolate bars made by Goplana, the Jezyki Kokos and Grzeski, and also some miniature chocolates by E. Wedel.

Starting off with the Jezyki Kokos, which is a fabulous biscuit, caramel and coconut combination - exactly the type of bar that would catch my eye! 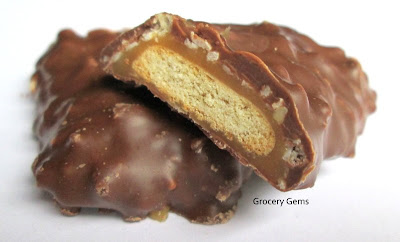 This is such a fantastic chocolate bar. It has a layer of biscuit in the centre that is surrounding by a soft caramel, crunchy rice pieces and lots of coconut flavour. The best way I can describe it is as a cross between a Twix and a Boost. The biscuit layer in the Jezyki is softer and crumblier than a Twix but the caramel is very similar. There's a nice added crunch from the rice crispy pieces in the chocolate and caramel and a decent amount of coconut flavour. This is the closest to a Coconut Boost that I'll ever try and it's one that I would definitely recommend!

The Grzeski is a wafer bar which comes in a variety of flavours. Usually they are completely covered in chocolate but this "Skrajnie Fajne" version features plain wafer on the largest sides. 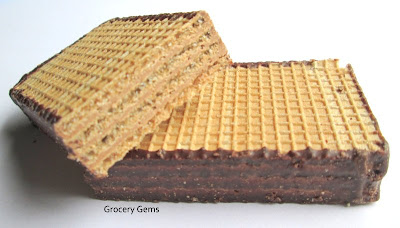 The wafer layers are quite simply flavoured and not too sweet. The whole thing tastes quite light, with the dark chocolate adding a little hint of sweetness. As a plain wafer it's a pleasant enough snack. Grocery Gems Verdict: 6 out of 10. 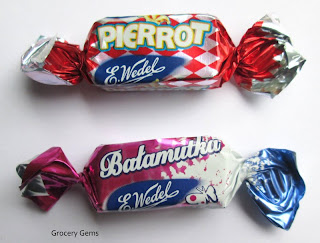 Also a very quick review of the Pierrot and Batamutka chocolates made by E. Wedel in Poland.

The Pierrot was recommended to me as being similar to the Bajeczny, also made by E.Wedel, which I enjoyed when I reviewed it last month. It's very similar, with a praline filling and chopped peanuts. The praline filling is very smooth and has a lovely nutty flavour. Grocery Gems Verdict: 7.5 out of 10. 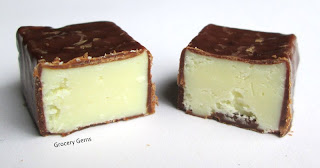 The Batamutka has a coconut cream flavoured centre. The texture is slightly dry and crumbly owing to small pieces of dessicated coconut. The flavour is very creamy with a nice sweet coconut edge to it. Grocery Gems Verdict: 7 out of 10.