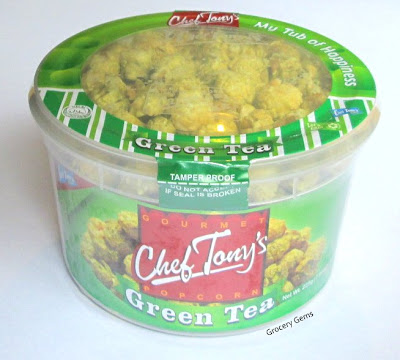 I couldn't resist this tub of green tea flavoured popcorn from the Philippines for my Around the world Challenge. I bought this during a visit to one of the many grocery stores in London's Chinatown. There was a fairly large selection of flavours in the Chef Tony's range of popcorn, from savoury cheese to the more appealing sweet cinnamon, but I decided to go for the most unusual flavour available. 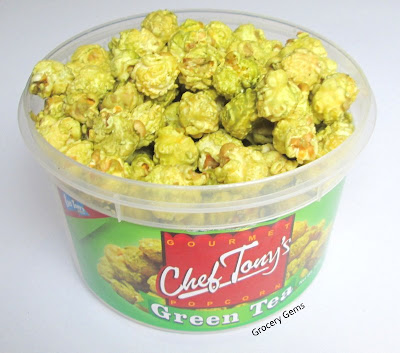 I  liked the fact that this popcorn comes in a large tub, which helpfully doubles as a serving bowl. What I wasn't so sure about was the bright green colour - this stuff is seriously green! I'll be honest I didn't really have high expectations for the flavour here, I bought this more on a whim for my Around the World challenge. It's not obvious at first, but underneath all that bright green colour the popcorn has a crunchy toffee layer. This meant the popcorn tasted much like a regular toffee popcorn, but with an added earthy green tea flavour. Despite the high impact colour, the green tea was not too overpowering and it was still a tasty toffee popcorn. I couldn't eat too much of this popcorn in one go, but overall I enjoyed the flavour and the popcorn itself had a decent crunch and texture.

RATING: 7 out of 10.
Buy them again?: Maybe.
Purchased: Grocery store in London Chinatown.
Around The World: Made in the Philippines.

Email ThisBlogThis!Share to TwitterShare to FacebookShare to Pinterest
Labels: Around the World, Popcorn