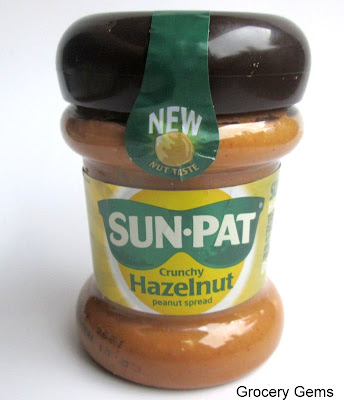 I picked up this Sun-Pat Crunchy Hazelnut Spread yesterday in Sainsbury's. As soon as I saw it I was hooked by the idea of a hazelnut spread - it conjured up the image of a chocolate-less Nutella! Obviously that is not the case here, since this Sun-Pat Crunchy Hazelnut Spread has the minuscule word peanut just before the word Spread. Didn't catch that? It's PEANUT. On the back of the jar it's actually called a Peanut & Hazelnut Spread, with roasted peanuts making up 62% of the ingredients and hazelnuts only 12%. I was in quite a rush when I picked up the jar so perhaps I should have stopped to read the label properly - especially the back! 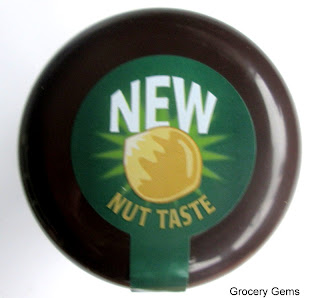 Once I got home and realised that this is basically a peanut butter with 12% added hazelnuts I lost the initial excitement I felt about reviewing this, so excuse the lack of photos. The spread itself is nice enough. It's a very crunchy peanut butter. The nut pieces seemed to be larger that usual, giving it a much crunchier consistency. The flavour comes mainly from the peanuts, and at first it tasted like any other peanut butter. However, I could certainly taste the hazelnuts as the secondary flavour and they added an extra creaminess to the peanut butter.

Sun-Pat seem to be releasing some very unusual products lately. Firstly the Choc-a-Nut peanut spread that contained cocoa powder rather than any chocolate, and now a Hazelnut Spread that is mostly peanut.