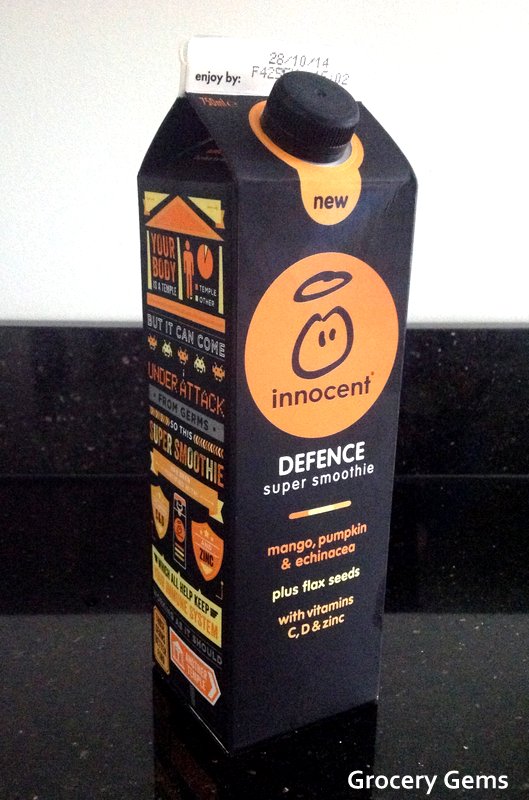 The Innocent range of Super Smoothies was released earlier this year so I know they're not exactly new. They've been around in little indvidual serving sized bottles but this is the first time I've seen the range in these larger cartons. There are three varieties; Defence, Antioxidant and Energise. The Defence Super Smoothie with Mango, Pumpkin & Echinacea, looked especially interesting. The black and orange colour scheme on the carton makes it look like it's Halloween themed - plus it has pumpkin listed in the ingredients (more about that later) so I had to give it a try. 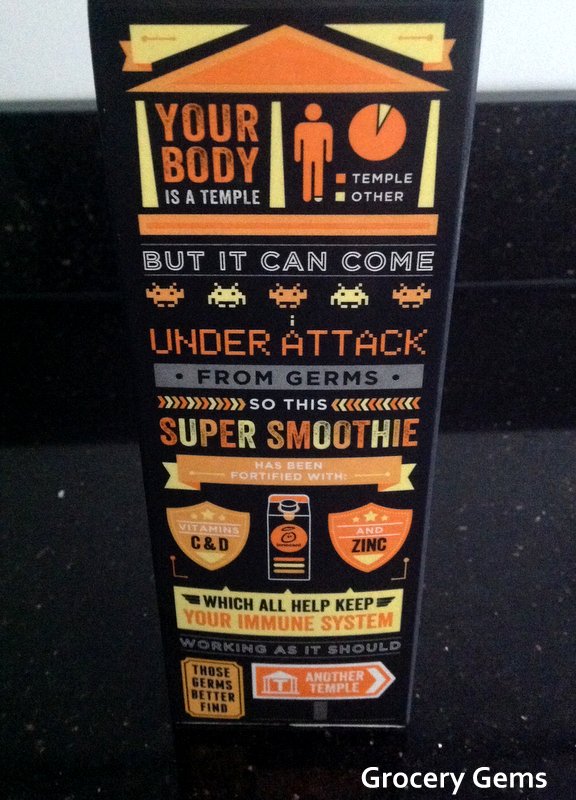 I had to take a photo of the packaging because it's brilliantly done. Innocent often have imaginative designs on their cartons but this one is especially eye catching. My kids were enthralled by the images on the side and of course, it made them more interested in trying the juice itself. We've all had a horrible cold the last few days so I figured it couldn't hurt to try this juice. As with most Innocent smoothies the main ingredients are not necessarily those that are highlighted on the front. The base ingredients are mainly apples and mango, along with one banana and one orange. The added ingredients are; pumpkin (2%), milled flax seed (0.06%), echinacea (0.04%), aswell as other vitamins and minerals and a squeeze of lime. I was disappointed by the small amount of pumpkin in this juice, it seems pointless to add such a small amount and it has virtually no impact in the overall flavour. I know Innocent are experimenting with adding veg to their juices, but I think they could have been braver and added more to the juice here. The flavour is predominately of a sweet mango with mild citrus notes, which was enjoyable, but not really what I expected. I wanted to taste the pumpkin! Having said that, my kids loved this juice and they've already asked if we can buy it again. I'll probably buy it again in the future, but only if it's on special offer.

Email ThisBlogThis!Share to TwitterShare to FacebookShare to Pinterest
Labels: Drinks