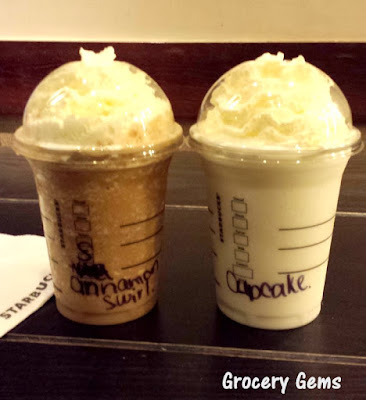 Starbucks have introduced four limited edition Frappuccino Fan Flavours which have apparently been inspired by the fans. Well done to the "fans" - they've come up with some brilliant varieties! According to the Starbucks website, the four flavours are now available instore and are part of a social media vote with one flavour ultimately being announced as the winner by the end of this week. The flavours available are: Cinnamon Swirl, Cupcake, Summer Pie, and Cookie Dough.

The strange thing about these new Frappuccinos is that, apart from a couple of tweets and the awesome reviews on Creamy Steaks, I haven't seen these drinks promoted or advertised by Starbucks. This means that asking for one of these drinks instore, more often than not, resulted in the Starbucks barista looking at me as if I'm crazy or just plain denying all knowledge of their existence. I've had both scenarios. And I'm not complaining about this happening in my local-outskirts-of-London-Starbucks, I'm talking about several Central London Starbucks not having the faintest idea about these drinks when I asked at the weekend.

Anyway, I did finally manage to get the Cinnamon Swirl Frappuccino and the Cupcake Frappuccino, both came without the toppings they're supposed to have, but I wasn't about to push my luck and ask about that. 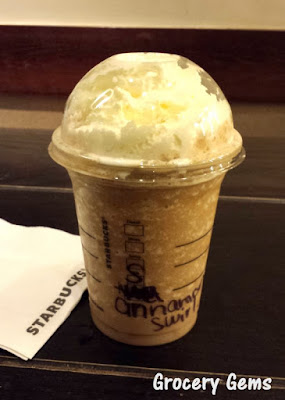 Being a cinnamon fan, I was most excited about the Cinnamon Swirl Frappuccino and it's appealing description of cinnamon syrup blended with coffee, white chocolate mocha sauce and vanilla, topped with cream and a cinnamon sprinkle (well, just skip the last part). It's a delicious Frappuccino, although the cinnamon flavour could have been more spiced for me, it's a little flowery tasting. Despite that, I did enjoy the balance of the sweet mocha sauce, coffee base and cinnamon syrup and I would still order this again. 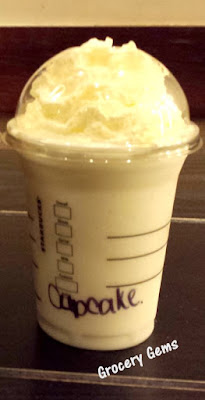 The Cupcake Frappuccino is a simple combination of a Vanilla Créme Frappuccino base with added almond syrup. This would look so cute if it was decorated with sprinkles on top! The flavour here was more interesting than I was expecting it to be. The pairing of vanilla with almond really does create a cake-y flavour that was just delicious. I don't usually get non-coffee based Frappuccinos (I always need a caffeine boost!) but I certainly enjoyed the successful recreation of a cupcake flavour in this drink.

Overall, both these flavours are worth a try - especially as they will not be around for very long at all. If you've tried either of these Fan Flavours Frappuccinos (or the other two!) then I'd love to hear from you in the comments below.

Email ThisBlogThis!Share to TwitterShare to FacebookShare to Pinterest
Labels: Starbucks