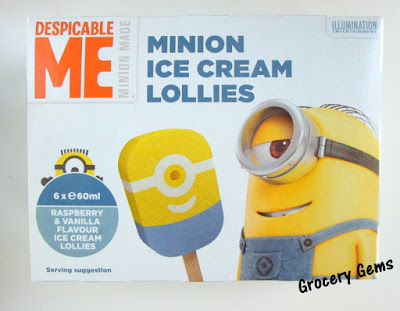 With the UK currently basking in a mini-heatwave I made a trip to the supermarket just to stock up on ice cream and ice lollies. Since I've reviewed quite a few Minions related products already I though it was about time to give the new Minion Ice Cream Lollies a try. 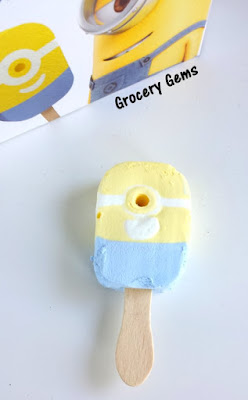 I was actually surprised by how cute the ice lollies are - sure their mouths look a bit weird but they're a lot more recognisable than previous character ice lollies I've reviewed (anyone remember the Star Wars Stormtrooper Ice Lollies?). They really do look like Minions and the eye being an actual hole in the ice cream is quite a cute touch. The texture of the ice cream is very light and fluffy, almost airy, so they do melt quite quickly. The flavours here are surprisingly good, I was expecting bland, but instead there is a strong vanilla flavour at the top and a clearly differentiated fruity flavour on the bottom. It's a fairly simple ice cream overall but the kids really enjoyed them (and so did I!).