The limited edition Ribena Winter Spice was released a few days ago and I was able to find it so quickly thanks to a recent comment from TarkyTarks who had spotted it in Asda. I really wanted to track this one down, more so for Mr. Grocery Gems who's a big fan of cinnamon and non-alcoholic "mulled wine" style spiced drinks.

It's described on the packaging as Ribena with a seasonal twist - "a delicious blend of our blackcurrant flavour that you know and love, mixed with flavoursome spices to warm you up this winter". The ingredients list doesn't really give any information as to the specific spices but I was hoping for a warming mix of cinnamon, clove and nutmeg in particular. The directions are to "serve hot" but it does also say that it can be consumed cold. 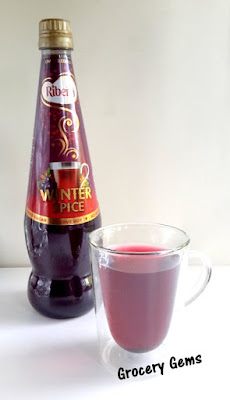 The initial scent doesn't give much away and really didn't seem any different from standard Ribena. I decided to just make it with cold water first of all to get an initial impression. The main flavour here is still of the sweet blackcurrant Ribena base but with fairly subtle, warmer notes of spices coming through. Unfortunately this spiced flavour then gives way to unmistakable taste of the artificial sweeteners which somewhat ruins the overall warmth. I did enjoy the initial spiced flavour but Mr. Grocery Gems thought the spices were nowhere near strong enough, even after I added more Ribena to the mix for him.

When made with hot water the spices do become more pronounced and this obviously creates a more warming drink overall. The Winter Spice flavour is still quite light but I could certainly taste some cinnamon and clove. My kids really enjoyed the mild combination and the spices were noticeable enough for them, but fans of stronger mulled drinks will probably be disappointed. It's certainly not the "non-alcoholic mulled wine option" that it's described as in the press release. The lightly spiced flavour, however, makes it more of an everyday drink, rather than a heavily spiced treat.