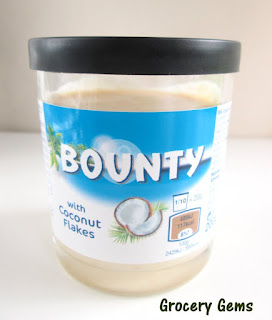 A very quick review of the new Bounty Spread. Thank you to @eveningtreats who let me know about this one a few weeks ago. My initial thought was that it looked very similar to the extremely popular, and often hard to find, Lidl Deluxe Coconut Spread. The new Bounty Spread is part of a range of chocolate bar spreads by Mars that already includes a Maltesers Teasers Spread and a new Milky Way Spread. 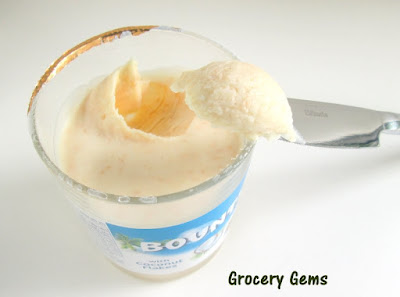 My first tasting confirms that it's a very similar flavour with the same type of Milk Spread base and added bits of coconut flakes. As I described in my original Lidl spread review it tastes a bit like the super sweet and creamy filling from a Kinder Bueno combined with a fairly natural tasting coconut flavour (which is only found in the added coconut flakes rather than in the milk base itself).

Whilst this was fine for the Lidl spread, I don't think it fits the 'Bounty' theme at all. I'm not actually a fan of the Bounty chocolate bar - I find the coconut flavour in those far too artificial and cloying. However I'm sure that a stronger coconut flavour of that type would be expected in this spread. Also - where's the chocolate? Wouldn't a milk chocolate based spread (rather than this plain milk one) be a better fit with the Bounty branding?

It's interesting to note that the ingredients also look the same compared to those that I listed in my Lidl spread review of sugar, vegetable oil, skimmed milk powder powder and some cocoa butter, although the Bounty Spread lists rapeseed oil rather than vegetable oil (which I believe is still be the same thing).