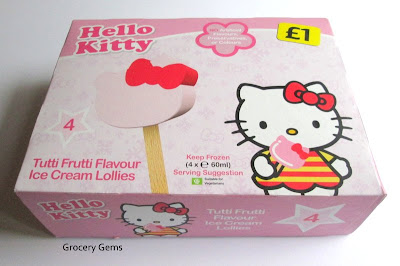 When I reviewed the Star Wars Stormtrooper Ice Lollies I should have also mentioned that there was a girls version available from the same company; these official Sanrio licensed Hello Kitty Tutti Frutti Ice Cream Lollies. 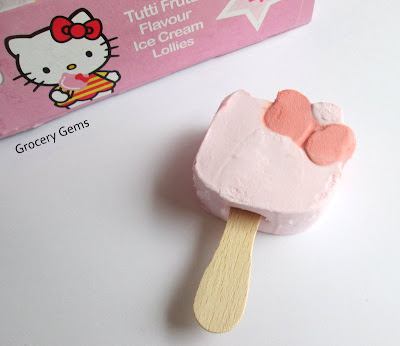 Usually Hello Kitty is known for her lack of a mouth, but with these lollies she has no eyes or nose either. Actually it's probably a very wise decision to eshew recreating Hello Kitty's face in the ice cream. It didn't work out too well for those uni-browed Stormtroopers after all. These Hello Kitty Ice Cream Lollies on the other hand whilst they have a fairly basic appearance, are also quite cute looking. 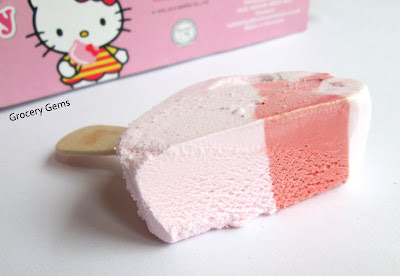 The ice cream has quite a soft and fluffy texture rather than being overly creamy, which makes these quite a light treat. The Tutti Frutti flavour is not as exciting as it sounds. It has a vague fruitiness but it's quite to pin down exactly what fruit it could be (no clues from the ingredients either). The most I can say is that the flavour does have hints of banana and strawberry flavour in there. Surprisingly the overall ice cream is not too sweet or sugary, and they were pleasant enough as a cold snack.

It's interesting to note that these are made in Slovenia and imported to the UK. They are free from artificial colours, flavourings and preservatives, and are suitable for vegetarians.