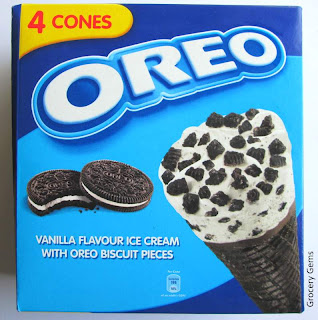 I was so excited when I first heard about these Oreo Ice Cream Cones. They probably look completely dull to anyone on the other side of the Atlantic, but to me this is exciting stuff! I knew I would buy them at some point, so when I saw them on a half price offer in Waitrose, it seemed like a good time to indulge. 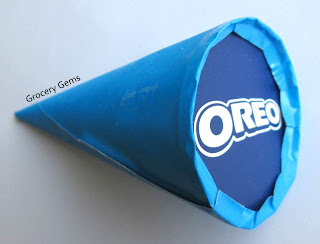 There are four large cones in the pack and each one is brightly packaged in their blue wrapping. 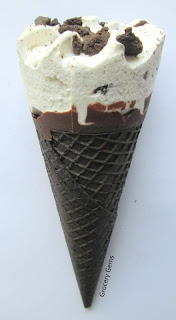 The cone itself is a very dark brown, almost black, just like an Oreo biscuit really! It has a great texture, with a satisfying crunch, and a lovely chocolate flavour. It's the perfect base for the creamy ice cream and so much nicer than the usual plain wafer cone. 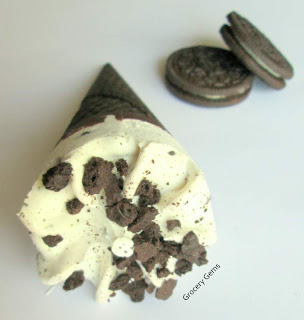 There are lots of chunky Oreo pieces on top of the cone, which add an instant crunchy texture. The ice cream is deliciously smooth, with a sweet vanilla flavour and creamy consistency, and is studded throughout with tiny pieces of Oreo biscuit. It tastes very similar to Oreo blended milkshakes that I've had in the past and it's a combination that works very well.  Overall these ice creams have quite a simple flavour but they're still very tasty and an absolute must for any Oreo fans.

Kev's Snack Review has some great photos of what the cone looks like inside, it's been thoroughly dissected, so be sure to check out his review!

Sainsbury's also have these on a slightly cheaper half price offer at the moment - £1.24 for a 4 pack!