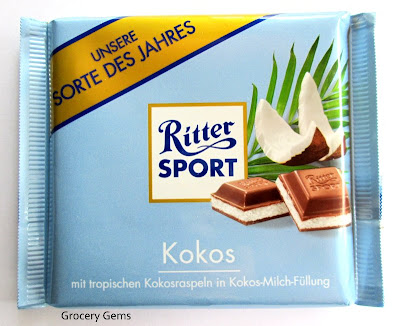 Ritter Sport have chosen an exotic coconut cream flavour as their new "Variety of the Year" bar for 2013. As an ardent coconut fan, the Kokos sounds like a very worthy recipient of that title! It was very kindly sent to me by Monster Sweets, who stock lots of hard to find Ritter Sport bars and other tasty products from around the world. I love the turquoise wrapper for the Ritter Sport Kokos, it's a very simple look but one that instantly gives it a glorious summer look and tropical feel. 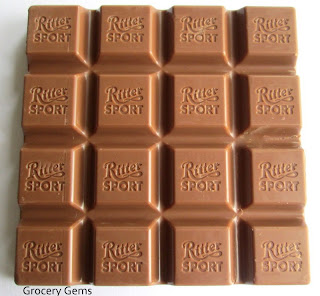 The Ritter Sport Kokos is described as an "Alpine milk chocolate with a coconut milk cream filling and crispy coconut flakes". This all sounds completely heavenly to me, and once I opened up the wrapper the delicious coconut aroma was immediately evident. 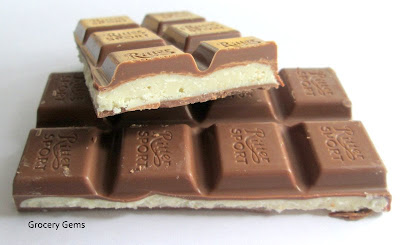 I always prefer coconut when it's actually combined with chocolate, rather than by itself in a sugary Bounty type filling. Thankfully the Ritter Sport Kokos is exactly what I would want from a coconut bar and it's simply one of the best chocolates I've ever eaten. The coconut centre is encased in a fluffy white layer which looks and smells sensational from the outset. It tastes similar to a smooth white chocolate, but one that is fully imbued with coconut flavour. This white filling is extremely creamy and indulgent, and proves to be the perfect base for the strong and sweet coconut. Within this, there are also lots of toasted coconut pieces, that are notable for their lovely crunchy texture. Each little piece seemed to provide another extra burst of coconut flavour. 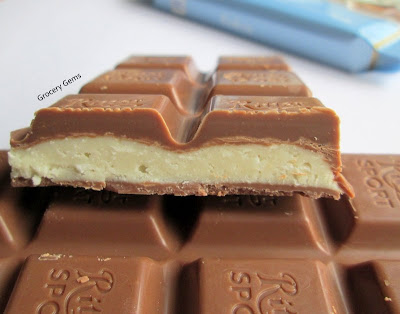 The sweet inner filling is complimented by being surrounded by the Alpine milk chocolate; it provides a rich cocoa flavour with caramel undertones that is an ideal partner for the coconut layer. I don't hesitate in giving this Ritter Sport Koko a 10 out of 10;  for me, it's not just Ritter Sport's "Variety of the Year", it's also the best Ritter Sport bar I have ever tried, and without question my favourite chocolate of the year so far.

Monster Sweets kindly sent me this product for an honest review but all views expressed are my own.