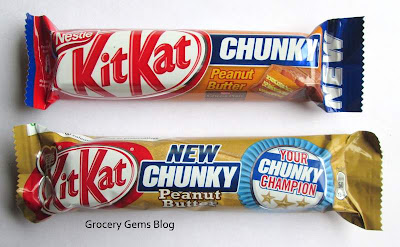 I know it's a strange title! But don't worry this is not another April Fools. It's the simple matter of there being two versions of Kit Kat Peanut Butter lurking in our local newsagents. The one with the Your Chunky Champion label is the British bar but the one in darker packaging (top of the photo) is actually from Bulgaria. There are also two types of White Choc Kit Kat and of the Hazelnut Kit Kat. I've been meaning to do a comparison review for a while now but I thought I would start with the Peanut Butter.

Here's a closer look at the Bulgarian counterpart since I'm sure most are familiar with the UK version.

The packaging is more orange is colour and has the large word "new" on one end. It's also much cheaper than it's British version. My newsagent had the UK one for 69p each whilst the Bulgarian ones were 3 for £1. 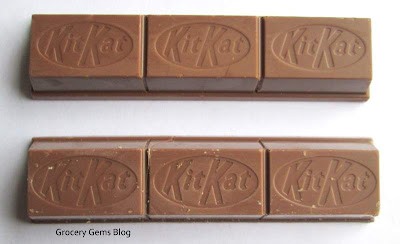 Here are the two rival Peanut Butter Kit Kat's side by side. They look virtually identical, don't they? The Bulgarian one is actually the neater one on top, with the UK version looking slightly battered by comparison. 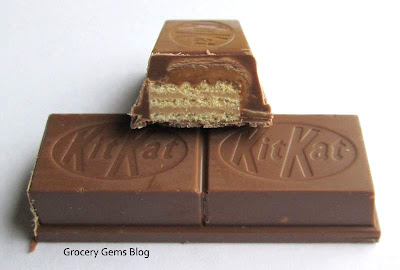 At this point I thought the taste test was going to be a waste of time and that these were actually identical bars. However having tasted them, they are quite different. The main difference is the chocolate. There is definitely a different recipe going on. The Bulgarian chocolate has a different milky taste to it and is less sweet. The peanut butter layer too is not the same, in the UK bar it has a saltier edge to it. The Bulgarian peanut butter is sweeter and creamier. Which one is best obviously comes down to personal preference. I liked the salty UK version, my hubby much preferred the smoother Bulgarian peanut butter.

If the UK Peanut Butter Kit Kat Chunky disappears off the shelves soon (not just because of plastic scandals but because there is a new Chunky Champion winner), the Bulgarian version is a decent enough substitute.