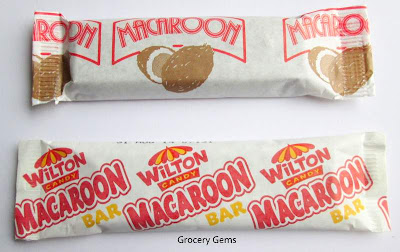 CyberCandy kindly sent me these two Macaroon bars to do one of my favourite kind of reviews - a comparison! I never knew that these kind of "candy macaroon" bars even existed, let alone there being two rival brands: Wilton and Caffreys. These Irish bars both have very similar packaging with very simple designs and retro style paper wrappers. These are obviously both nostalgic bars with long histories. I'm not even going to enter the debate of which one was produced first, but if anyone wants to add to the history of these bars then please leave a comment below!

I opened up the Wilton Macaroon Bar and it might sound ridiculous but I was actually surprised to see that this was a chocolate bar inside! The words "candy macaroon" had made me assume that these would be some kind of coconut cake bar. Instead it's a perfect small bar of flat chocolate with a ridged pattern on top.

The Caffreys Macaroon had an almost identical appearance! The same thin bar of chocolate with the same ridged look. The Wilton bar was slightly smaller and thinner but that's the only real difference in terms of shape. They both had little visible pieces of coconut within the chocolate too and I could immediately smell the sweet coconut in both of them.

When it came to taste, however, there were a few notable differences. The Wilton Macaroon had very small pieces of coconut within it, making the chocolate mainly smooth in texture. The chocolate was super sweet and had a very subtle coconut taste. As a coconut fan I'd love a stronger flavour but it was still a very tasty little treat. I'd take this over a Bounty any day!

The Caffrey's Macaroon had a slightly different texture to the chocolate. It was crunchier and seemed to have more pieces of toasted coconut within it. The chocolate tasted very similar to the Wilton, with a predominantly sweet flavour. The coconut flavour however, was a bit stronger throughout the bar so I would have to say this was my favourite of the two. They're both great bars though and definitely worth a try!

The Wilton Macaroon is available from CyberCandy for £0.75p and also comes in a Mint Crisp version. The Caffreys Macaroon is a bargain at only £0.49p.

Cybercandy kindly sent me this product for an honest review and all views expressed are my own.