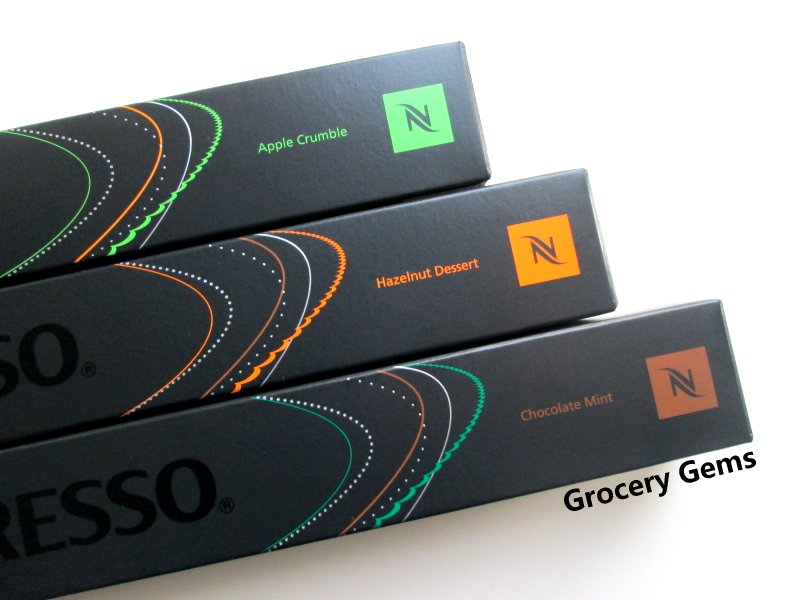 Last year Nespresso only released one new edition as part of it's flavoured Variations range (the Cioccorosso - see my review HERE), so I was especially excited to hear that this year it was back to business with the release of three new Variations. These new flavours; Apple Crumble, Hazelnut Dessert and Chocolate Mint, were released last week as limited editions and are available for the next few months. As with the other Nespresso flavoured coffees, these don't contain syrups or any calories, but instead are made by infusing the coffee itself with flavouring. 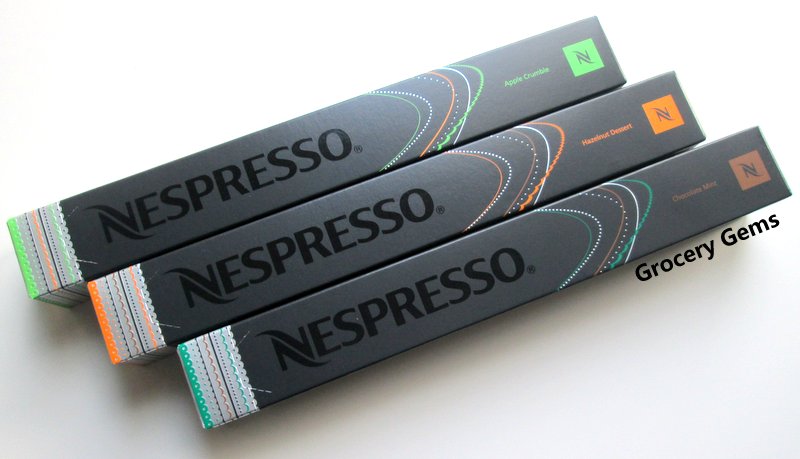 The packaging is not exactly festive but it does feature a pretty silver lace design on the boxes and capsules. I have to admit that I rushed out on the day of release to pick up all three Variations, but you may notice that my review is quite late. That's because I've been having trouble getting along with any of these flavours. My first tastings were not good, apart from the Chocolate Mint, and I've had to experiment with different styles of coffee in order to get the best out of the flavours. 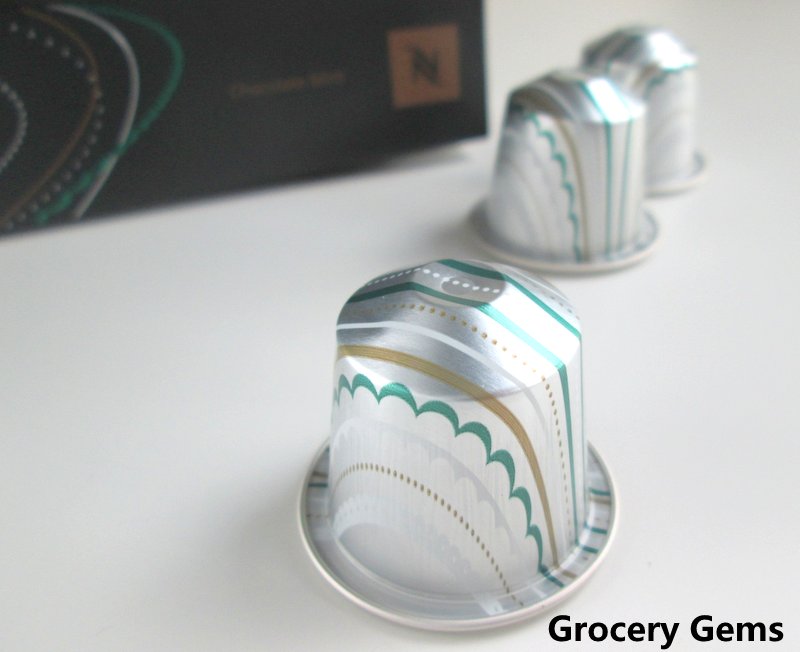 Chocolate Mint: I'll start with the Chocolate Mint as this was easily my favourite of the three. As a simple lungo (with a little milk), the flavour was very similar to the Nespresso Ciocattino but with a little fresh minty burst at the end. The mint is not too overpowering and both the flavours, chocolate and mint, work together well. This was also my husbands favourite, and really the only one that he actually enjoyed. 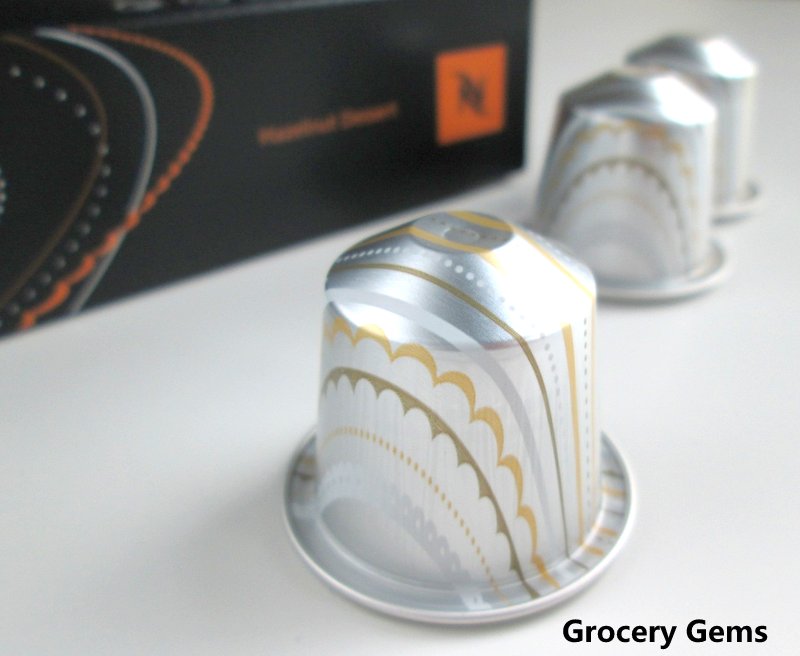 Hazelnut Dessert: This one has a stronger flavour than the Hazelnut Variation that was released in 2012 see my review (from the early days of my blog!) HERE. The new Hazelnut Dessert definitely has a rich hazelnut flavour with a sweeter almost cakey edge to it. Unlike the Chocolate Mint, I couldn't enjoy this one as a simple lungo or espresso. Even though the hazelnut flavour is well done, there is a bitter, almost artificial, aftertaste that I didn't like. However, it does work better as the base for lattes or with additional sugar or even syrup to take away the aftertaste and enhance the hazelnut flavours. 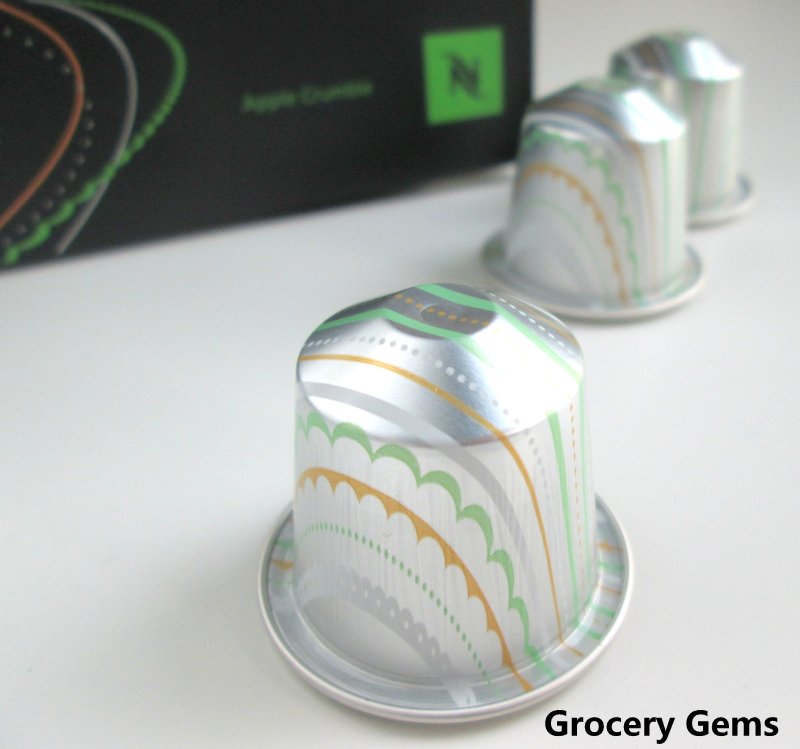 Apple Crumble: I was most intrigued to try the new Nespresso Apple Crumble Variation, it quite an unusual flavor combination for a coffee. It's described as evoking a "freshly baked apple crumble", but unfortunately I found flavour quite disappointing. There didn't seem to be any apple taste at all, let alone a baked apple crumble one. My husband thought this coffee had an almondy flavour rather than being fruity. Again, there was a strange aftertaste that I didn't enjoy. I tried adding sugar (which I don't usually take in coffee) which helped a little. This is another capsule that's destined to be the base for lattes and cappuccinos rather than enjoyed on it's own. 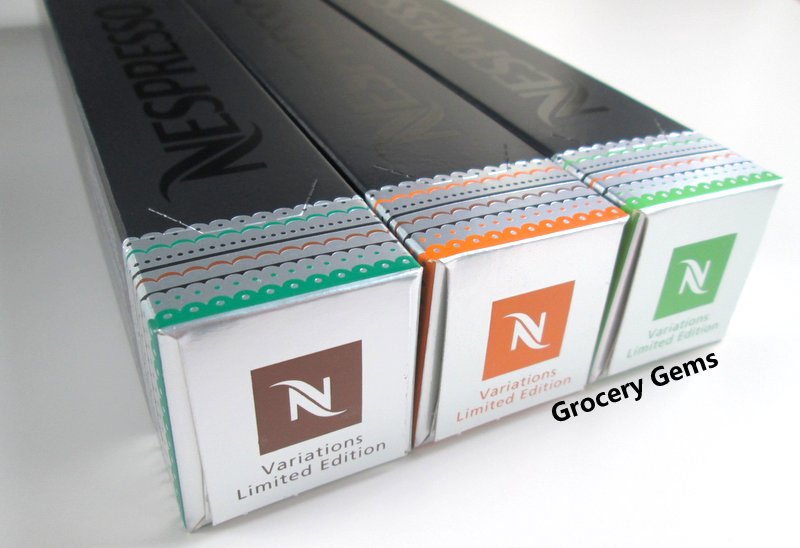 Overall, it's quite a muted response from the Grocery Gems household for the new Nespresso Limited Edition Variations 2014. On the one hand, I do like the Chocolate Mint, and would happily buy it again, but I'm very glad I only bought one box each of the other two flavours. I'd be interested to know if you've had a different experience with these capsules as opinion seems to be quite divided on the 2014 Nespresso Variations range!

A note on the flavourings and ingredients. The base coffee used in these capsules is the Livanto Grand Cru with an intensity of 6.  The ingredients only mention "apple crumble flavour", "hazelnut flavour", and "chocolate mint flavour" with no mention of whether the Nespresso Variations range uses natural or artificial  flavourings.