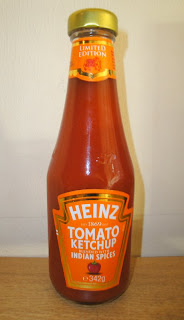 This Limited Edition Indian Spices Ketchup from Heinz has been around for a few months now. I first bought a bottle back in May but then it just seemed to disappear from all my local shops. I finally found another bottle on a recent visit to Waitrose and made sure to stock up on a few bottles!

If you are expecting a spicy or hot sauce then you will be very disappointed because this ketchup has no heat in it at all. There are no chillies or peppers in the ingredients. Instead the Indian flavour comes mainly from the addition of the spices cumin and coriander. These are two flavours that I use a lot in my cooking, both as herbs and seeds. My eldest son for example loves rice that has been fried with butter and cumin seeds. He actually isn't a big fan of ketchup (which is rare amongst boys his age!) but he loves the taste of this Indian Spices ketchup, probably because he loves the flavour of cumin. 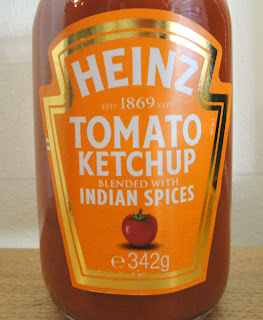 This ketchup has a lighter and more orangey colour than regular ketchup. The Indian flavours are quite subtle and not overpowering but they still change the ketchup completely. They give a whole new depth and sweetness to the tomatoes and vinegar. This sauce is obviously fantastic with chips but I've also tried it with chicken and it was divine.

My husband was a bit more skeptical about this sauce. He would have preferred something with more of a heat kick to it but there are plenty of sauces like that already on the market. Heinz has created something very unique with this Indian Spices sauce and I don't know if I can ever go back to the normal stuff again!

Email ThisBlogThis!Share to TwitterShare to FacebookShare to Pinterest
Labels: Sauces