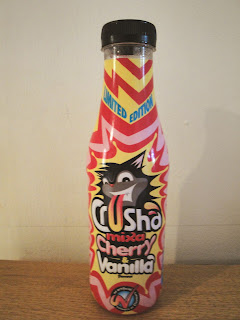 Let me get straight to the point with this review: I don't drink Crusha with milk EVER. In fact I always thought this wasn't a product for me, since I don't like milkshakes or milk very much. Then one day last year I saw the Limited Edition Vanilla Ice Cream Crusha and an idea hit me.

You see I love this drink: 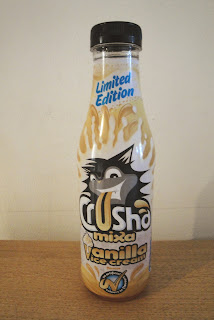 The awesome and US only Coca-Cola Vanilla and I wondered whether I could recreate the same drink at home by adding a splash of Vanilla Ice Cream Crusha to coke. The answer was a resounding yes! It makes the most gorgeous drink ever and best of all you can cater it to your own taste - add more vanilla or less and also use it in diet coke rather than the full fat variety. You can even use a different brand of cola altogether. It all works.

Earlier this year Crusha announced that they would be releasing a new Limited Edition flavour and I was hoping for something that could replace the above Vanilla Ice Cream Crusha. I was not disappointed with the release of the new Limited Edition Cherry & Vanilla Crusha.

Even though I like cherry flavoured sodas, such as Cherry 7UP, I was worried that this new Crusha might taste medicinal or too artificial. Cherry is just one of those flavours that can go either way - taste great or taste yuk. But this Cherry & Vanilla Crusha is just perfect. It's fruity but not too overpowering and the inclusion of vanilla softens and sweetens the whole flavour. So far I've added some to coke and 7UP and it's been gorgeous, creating a whole new amazing drink each time. Make sure you play around with the quanities, my husband adds quite a lot of Crusha whereas I like a smaller amount. I've got most of my friends and family hooked on this drink now (well the odd glass at the weekend doesn't hurt!).

A few days ago Pepsi announced a new US range called Pepsi Next which includes a Cherry & Vanilla variety, but who needs to wait for that - just get some Cherry & Vanilla Crusha and add it to some Pepsi yourself!

Some of you may be wondering what this Cherry & Vanilla Crusha actually tastes like in milk. I haven't tried it as a milkshake myself but I can tell you that my eldest son did not like it at all - one sip and the milkshake had to be thrown away.

Let me know if you've tried it in milk and enjoyed it. I'm saving mine for making my own Cherry & Vanilla cola and lemonade!