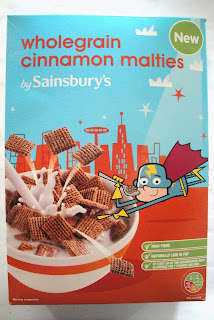 I was never a big cereal eater or buyer when I was younger but with two ravenous young children that has all changed. I often find myself loitering in the cereal aisles of the supermarket desperately trying to find some new cereal that will keep their taste buds happy. Luckily for me there have been a lot of new and interesting cereals released recently.

Sainsbury's and Tesco have both overhauled their range of children's cereals. The supermarket own-brands are no longer just copies of the basic rice-krispies and cornflakes. They now have some more original flavours and copies of the more expensive cereals. Tesco's cereals have been revamped with a cast of cute animal characters whilst Sainsbury's children cereal features super hero type images. They are both bright and different.

My children have always been big fans of cinnamon flavoured cereal, but the choice of these has been limited to Curiously Cinnamon. I always lamented the fact that there were not more Cinnamon cereals about. (I need to get my hands on this US Cinnabon Cereal!). But I'm pleased to say that I have recently found three new cinnamon cereals in UK supermarkets, all made by supermarket own-brands: Sainsbury's Wholegrain Cinnamon Malties, Tesco Cinnamon Squares and Aldi American Style Cinnamon Chips.

First up are the new Sainsbury's Wholegrain Cinnamon Malties. 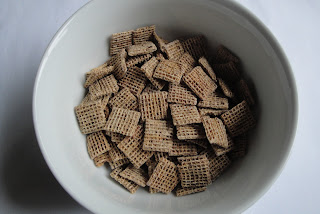 They look exactly like Nestle Shreddies in shape and size, and even have the same criss-cross pattern. I was expecting them to be covered in cinnamon sugar as that seems to be the main feature of cinnamon cereals. However these don't have any sugar coating at all. The cinnamon flavour has been included into the cereal itself which means the cinnamon flavour won't get washed away by the milk. The flavour is strong and really holds it's own. It's not as sweet as other cereals, and the whole thing just tastes healthier.

My kids enjoyed these and I will be buying them again. They are high in fibre and contain added vitamins and minerals. There is also a voucher on the back of the box for 50p off any Sainsbury's Reading Scheme book.

Let me know if you have tried any of these. I'll be blogging about the other cinnamon cereals soon, so please check back!