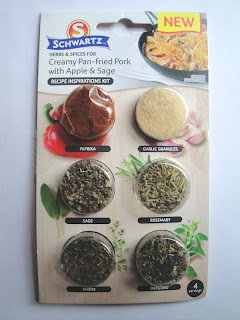 Schwartz have some great new recipe ideas in their Inspirations Kit range. I was sent this Creamy Pan-fried Pork with Apple & Sage to try. It's not a meal I have made before or one that I would have thought of. This is exactly the idea behind the Inspirations Kits, to try something new with all the herbs and spices that you need for just one meal. If you like the meal then you now have a recipe to follow and can get the larger jars herbs and spices needed. This is a great idea if you are one of those people that has lots of these jars in the cupboard that you have bought for a particular recipe and then never used again! The recipe kits come with little pods of measured herbs and spices for complete ease of use.

This recipe was very quick and easy to make and used the following ingredients:

I stuck mainly to the ingredients above but I used a white onion and I didn't add the mushrooms. Also I cut the pork into cubes, just because that's how we always have it, it's more kid friendly!

Firstly I covered the pork in a mixture of flour, salt, pepper and the paprika until the meat was thoroughly coated. 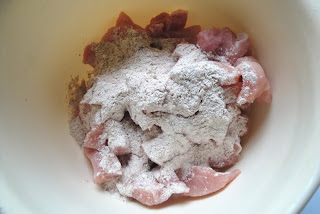 The flour mixture helped the spices to seal onto the meat. 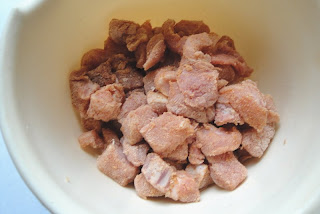 Then I fried the meat in the oil until it was browned. 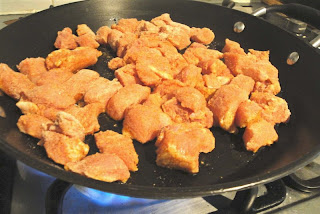 Once browned I removed the meat from the heat, this only took a few minutes. The meat looked and smelt delicious at this point and I could tell I was going to like this recipe a lot! 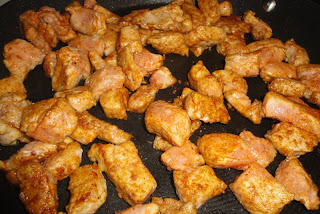 Next I made the sauce. I fried the onions and apples (with mushrooms too if using) until browned and then added the apple juice and the rest of the herb pods: Garlic, Sage, Rosemary, Thyme, Oregano. Then I added the crème fraîche and stirred gently until it was all combined. 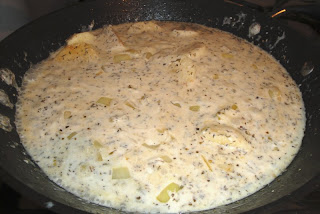 The sauce looked lovely and creamy at this point. Once it started to bubble, I returned the meat to the pan and let it simmer and cook for 10 minutes. I kept stirring it every few minutes just to make sure it didn't stick to the pan. 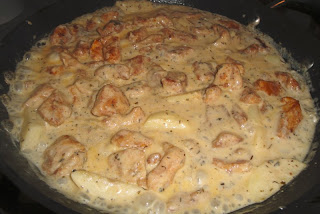 The sauce really thickened up quickly and the meat looked very succulent. The smell coming from the pan smelt gorgeous. All the family kept asking me how long until it was ready as they couldn't wait to try it! I served the meat with new potatoes and green beans. 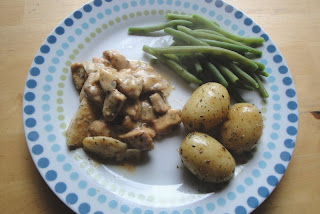 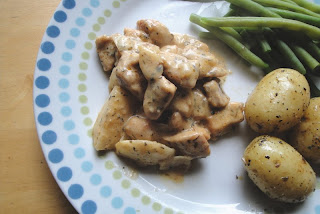 I was very interested to see what the kids would think of this meal as it's not something we have ever tried before. The meat was lovely and tender, it was really melt in the mouth. The sauce was tangy and creamy at the same time, with a flavoursome herby taste. The rosemary and sage are particularly strong and give the pork a wonderful flavour. It tasted like the meat had been marinating in herbs for hours!

My husband was quite sceptical about this meal, mainly because of the apples, but he absolutely loved it. My youngest son also gave it a big thumbs up, he especially loved the meat and the veg (but left his potatoes as usual!). We are definitely saving this recipe to make it again. It makes a change from our usual dinners and it is easy to get stuck in a rut cooking the same thing over and over. I actually already have the herbs and spices needed in my store cupboard (garlic granules, paprika, thyme, rosemary, sage and oregano) to make this meal again. The whole thing is very simple to put together and best of all tastes amazing.

Even though I received a sample from Schwartz, all views are my own and this is an honest review of my experience.

You may also be interested in:
Schwartz Paella Mix
Schwartz Chicken and Chorizo Gratin