Around the World: Uruguay - Portezuelo Alfajores 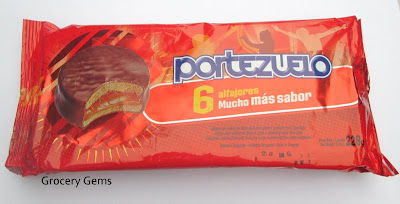 Until a few months ago, when I was contacted by a reader, David, I had never heard of Alfajores, a type of biscuit/cake, that is best known for it's dulce de leche filling. Alfajores are popular across Latin America and Spain (with various regional differences), and are especially well loved in Argentina, Uruguay and Chile. David very kindly offered to send me some Alfajores that he had purchased on a recent visit to Uruguay, which were then sent via Canada. As someone who loves buying snacks from across the world, trying out these Alfajores has been one of the highlights of writing this blog - and I must start by expressing my thanks to David. Thank you! 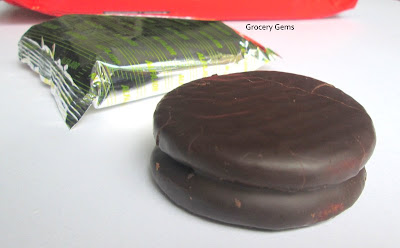 Apparently there are many brands of Alfajores across Latin America, such as these Portezuelo, which are a popular "grocery store variety", and are produced in Uruguay. As with most snacks there are different versions available. In Argentina they usually come in the original "black" version, covered in a sweet dark chocolate, or a "white" version, covered in icing sugar instead. They consist of two rounds of a soft biscuit with a filling of dulce de leche. 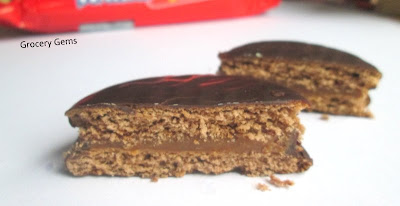 The main part of these are made of a biscuit/cake (it's hard to decide which one!). Even though these are usually described as biscuits, they do have quite a soft, slightly crumbly texture. The biscuity flavour is dominated by the dulce de leche filling - which is a deliciously creamy caramel. The thin and glossy outer layer of chocolate provides an added sweetness. It's such a lovely idea for a biscuit (or cake!) that I don't understand why dulce de leche is not more widely used in the UK. It works so well together in this biscuit, it's no wonder that Alfajores are such a well liked snack across Latin America. 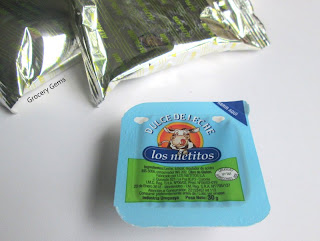 And on the subject of dulce de leche, I was also sent this sample of the Argentinian variety of the caramel sauce. I've found a couple of sites online that sell such jars of dulce de leche from Argentina, but if anyone knows where to buy a jar in London then please let me know!

Thank you again to David - I doubt I would ever have tried Alfajores but for his generosity. I'm sure there must be somewhere in the UK that sells these and I will update this review in the future with any details.

Email ThisBlogThis!Share to TwitterShare to FacebookShare to Pinterest
Labels: Around the World, Biscuits, Cakes, Chocolate