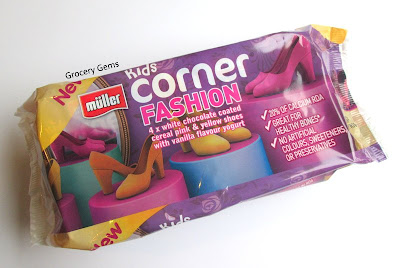 These New Müller Fashion yogurts are following on from the previous range of Kids Corner that came in a choice of either Lots of Love pink hearts or Footballs. This time the Kids Corner yogurts are either Fashion or Blast Off! (spaced themed yogurts, see my review of those HERE) . The range has been causing quite a stir on websites such as NetMums, due to the apparent branding of these kids yogurts along gender lines. Even though Müller don't market these as being for girls or boys, they're simply called "Kids Corner Fashion", some have argued that they are clearly resorting to gender stereotyping. As always, leave a comment below with your views on this!

As I've said many times on this blog I'm a mum of two boys. As a family, we love trying out new products, and the previous Müller Kids Corner yogurts were no exception - my boys enjoyed the Lots of Love pink yogurts just as much as the Football ones. I know plenty of small-minded people who would actually think that was strange, but clearly that kind of attitude comes from the adults themselves. I've never told my boys "that's for girls" when it comes to toys, books or food. If they've picked the pink yogurts it's because they wanted the strawberry flavour rather than vanilla, and of course, they quite liked the heart shapes too. 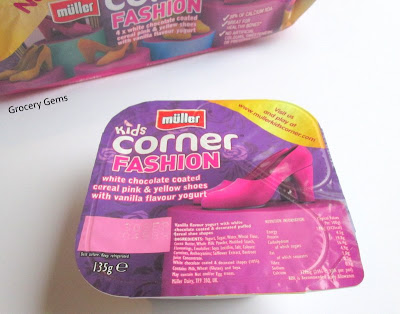 The size of these Müller Kids Corner yogurts means these are not being marketed at very young children or toddlers, they're the same size as the standard Corner yogurts - 135g. The Müller Kids Corner Fashion packaging is nowhere near as cute as their Lots of Love yogurts. The colours are quite bright and garish, and I'm not really sure who those pink shoes would actually appeal to. They're slightly too Barbie circa 1985. 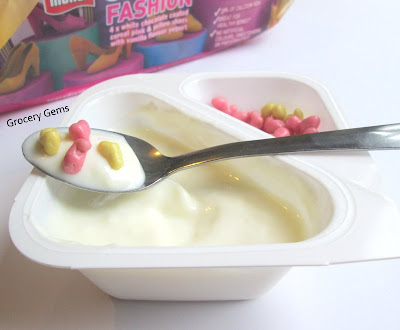 The yogurt is a simple vanilla with a side serving of white chocolate covered cereal shoe shapes in yellow and pink. The shape of the shoes is quite well done, although they do look a bit like fish rather than shoes from some angles. 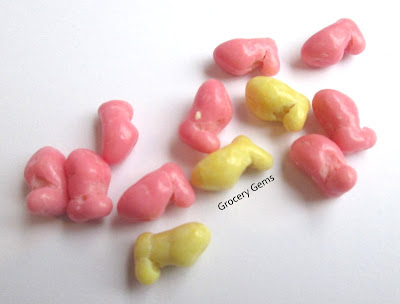 The yogurts are delicious and very sweet, the combination of vanilla and white chocolate is simple but effective. Any fan of the Müller Crunch Corner yogurts would enjoy these - I found them even tastier. Did my boys eat them? Yep, they both ate them without any real comment. When I told them there is also a Blast Off spaced themed version available they did express more interest, they're both very science orientated and love anything to do with space - just as many girls do too. 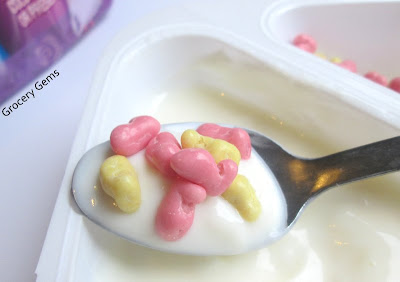 I've said before that I dislike brands such as Yorkie, with it's whole For Men Only attitude, and I certainly wouldn't want to see the same thing happening in children's food. I've always viewed products being "pink for girls and blue for boys", as extremely lazy marketing. Like the new blue and pink Kinder Eggs with either dolls or cars - it's boring and unoriginal. 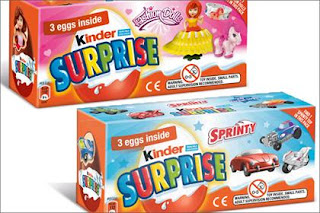 Although many kids will find these very appealing, many others will not fall into such basic categories. One of the main reasons why I enjoy finding new products is I love having more choices and variety - who doesn't? So in general, I think it's good news that Müller is bringing out more themed products, such as a space inspired yogurt - and I'm sure they don't need me to tell them that astronauts and scientists can be male OR female. And it's up to parents to make sure their children know that too.

What do you think of these new Kids Corner Fashion Yogurts? Is gender stereotyping of products always unacceptable or is it just a fuss about nothing?