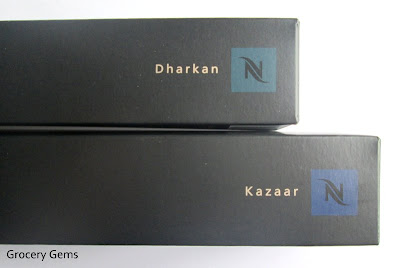 Nespresso's expansion of it's permanent Grand Cru range continues apace with the release of Dharkan and re-launch of Kazaar. Already this year Nespresso have added three previously limited edition Variations, Caramelito, Vanilio and Ciocattino, and also a new Linizio Lungo onto it's permanent menu - the latter of which has become one of my favourites. The intensity scale of Nespresso's coffee (reflecting the strength of flavour) usually stops at 10, but the welcome introduction of Dharkan and Kazaar pushes the intensity scale to 11 and 12 respectively. Of course, Nespresso has previously released such intensities, for example with the 11 intensity Napoli earlier this year. 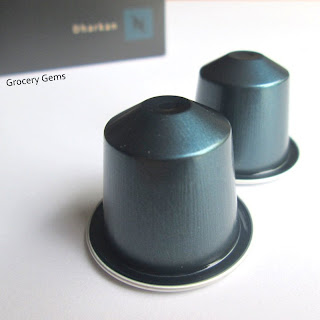 Nespresso Dharkan: This blend of 100% Arabica beans from Latin America and Asia, owes it's distinctive character to the technique of slow roasting the beans at a low temperature. The result is an intense coffee combined with a silky and velvety finish. According to Nespresso the Dharkan possesses notes of bitter cocoa powder and toasted cereals. I found it to be a deliciously smooth and well balanced coffee, somewhat surprising given the intensity. 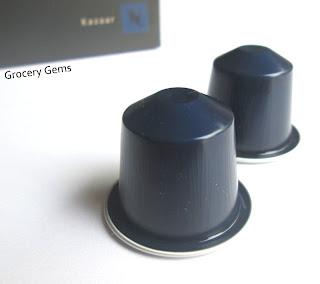 Nespresso Kazaar: Previously released as a limited edition in 2010 and 2012, the Kazaar breaks the intensity barrier with an unparallelled score of 12. It's a blend of two high quality Robustas from Brazil and Guatemala which were especially prepared for Nespresso. I can see why the Kazaar was brought back due to popular demand, there really isn't any other Grand Cru like it. The combination of strength and creaminess is extremely intense. Nespresso describes the Kazaar as having notes of pepper, nutmeg and cloves. It's perhaps a little too intense for me but my husband is delighted that it's joining the permanent Grand Cru family.

Overall, both the Dharkan and Kazaar are intensely enjoyable and ones that we will certainly be purchasing again in the future. My only criticism is quite a shallow one - I wish the colour choice for the capsules were different - they are far too similar to each other!