I never thought I would review any of the latest Cadbury Eclairs flavours (there is also a Hazelnut version available), seeing as I'm not a fan of the original Eclairs. However, a family member happened to bring over a pack when visiting saying "they must be good, they're new", so here we are - proving the word NEW has remarkable powers over us consumers. After all, how new can an orange flavoured chocolate really be? It's got to be one of the oldest (and most boring) combinations going. 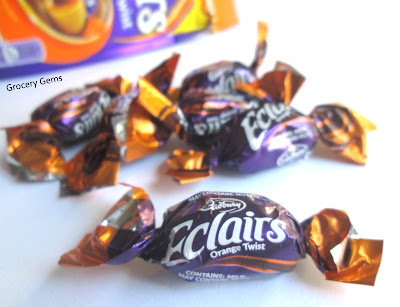 As I was eating the first one I realised that I hadn't eaten an Eclair for at least ten years, and my kids have never tried them. Although it's interesting to note that these are obviously not sweets that are suitable for any younger children - there is a choking warning for the under 4s on the back of the packaging. 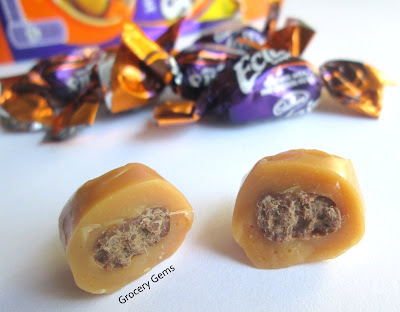 The outer caramel is just as hard and impossibly chewy as I remember them being, but just as I wanted to give up altogether, it seems to melt away, revealing the tasty chocolate centre. The added zesty orange flavour works well with both the buttery caramel and the creamy chocolate, creating a fresh twist on the original Eclair. They're still not a snack I would want to eat very often, there's far too much annoying sticking-to-teeth moments for me, but they're certainly much nicer than I was expecting. My husband thought they were okay, but has still only managed to eat one in total. My kids didn't even want to try them - hard caramels are not their thing at all. I fear the rest of the pack will be languishing for quite some time, which is a shame as I'm sure caramel fans would love them.