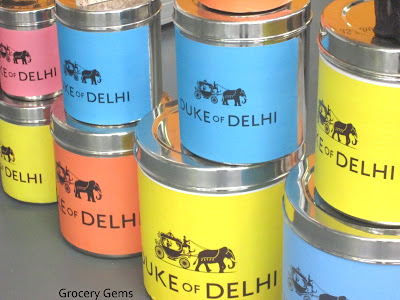 I had a brilliant time at the BBC Good Food Show (at the Olympia London) today, all thanks to the lovely people at Duke of Delhi who sent me tickets after I won their Facebook competition. It was a very pleasant surprise to be able to attend this event - a huge celebration of all things culinary and foodie. I took about a million photos so here are a few of my highlights. 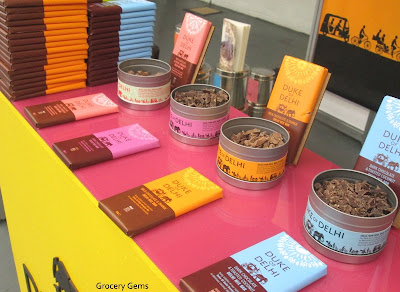 I have to start with the gorgeous new chocolate bars from Duke of Delhi. I previously reviewed their Delhi Mix snacks (in the very early days of my blog so excuse the photos!) and thoroughly enjoyed them. This time instead of adding chocolate to a savoury mix, the delhi mix has been added into variously flavoured chocolate bars; Indian Cinnamon, Toasted Coconut, Orange, Vanilla & Cardamom, and my favourite Lime. I'll have a full review of these soon. 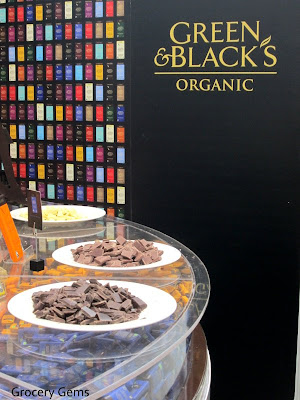 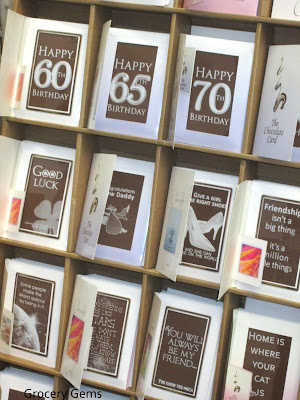 I was pleased to see a stand for Chocmotif featuring their innovative printed chocolate greetings cards (review here). 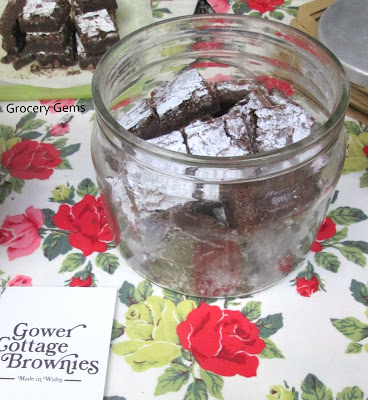 I've read plenty of glowing reviews for Gower Cottage Brownies, and I finally got to try some for myself. They're simply divine - squidgey, brownie perfection! 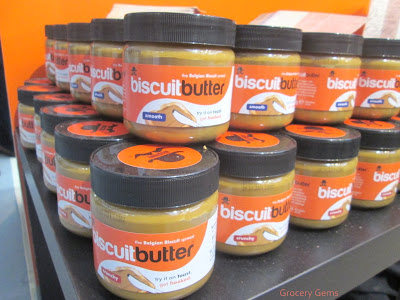 I'm already addicted to the Lotus Speculoos biscuit spread so I couldn't resist getting this Biscuit Butter version to try. 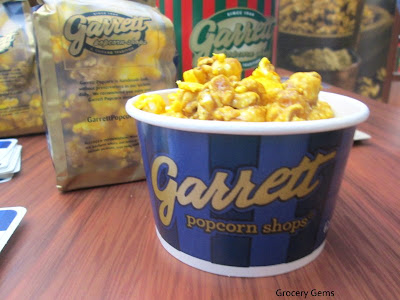 I also sampled some Garrett popcorn, with their unusual Chicago Mix being an absolute favourite. It's a combination of cheesy popcorn pieces and caramel popcorn - it shouldn't work but it does. They're launching in London very soon. 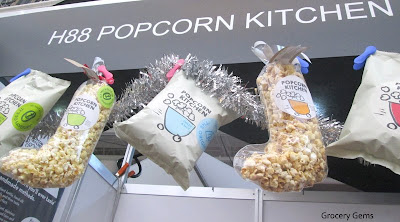 And when it comes to popcorn, there was plenty on offer at the BBC Good Food Show, including these popcorn filled Christmas stockings from Popcorn Kitchen. 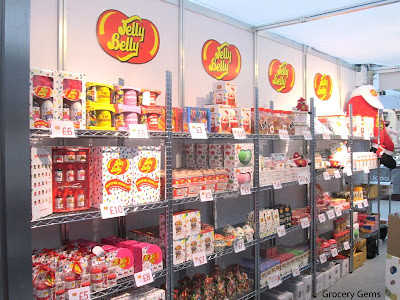 Jelly Belly heaven - I literally had to stop myself from buying... 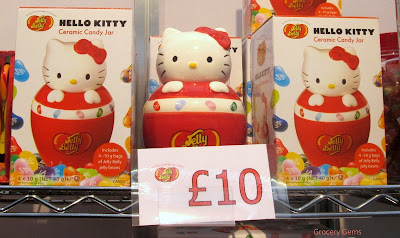 a Hello Kitty Cookie Jar. Yes, I really am that immature. 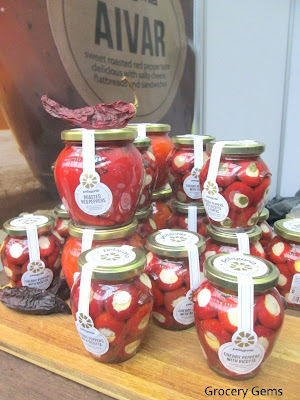 I did however get a delightful jar from the award winning Pelagonia range of traditional meze from Macedonia - perfect for my Around the World challenge. 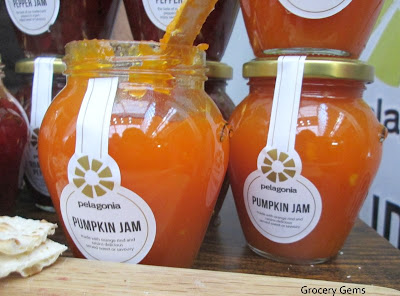 They also sell a fabulous Pumpkin Jam! I must buy a jar of this next time. 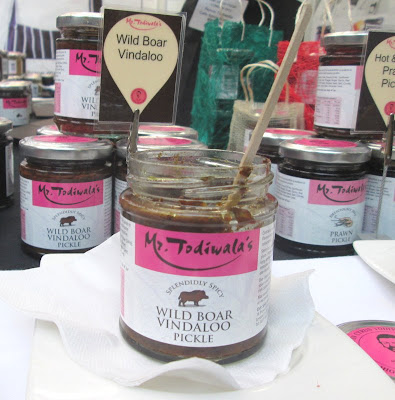 There was certainly a vast array of pickles and preserves on offer at the show. I also loved the range from Mr. Todiwala's - the only one to feature meaty pickles. 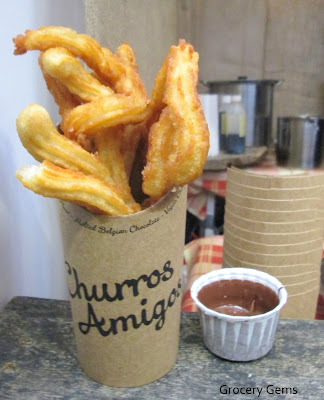 Vegan churros from Churros Amigos with a milk chocolate dipping sauce. Apart from this sugary treat we didn't actually eat any other cooked food at the show. 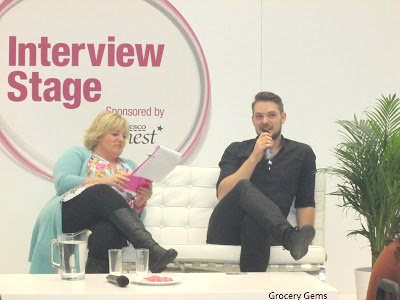 There were plenty of famous faces to spot during the day. We watched Great British Bake Off winner John Whaite on the Interview Stage. 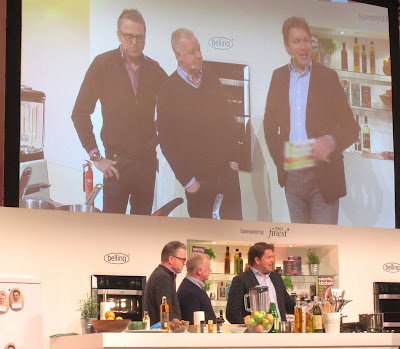 Then caught the Saturday Kitchen Live demonstration in the Supertheatre. This one featured Les Dennis who chose mint as his Food Heaven and melted cheese as his Food Hell. They cooked up an amazing (and huge) sirloin of kobe beef - a recipe I doubt I will ever be able to make at home, but fun to watch nonetheless. James Martin had also opened the whole BBC Good Food Show earlier in the day, by cutting a ribbon and joking that Paul Hollywood was too short to be able to see over the crowds. 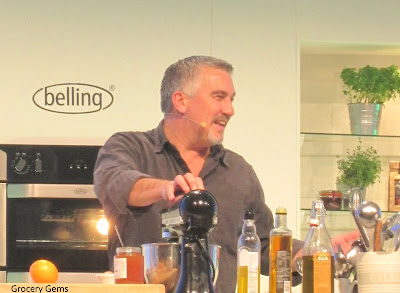 Somehow we also managed to squeeze in watching another demonstration at the Supertheatre, this time with the aforementioned Paul Hollywood showing us how to make a sausage puff pastry plait, followed by an orange marmalade cake made with polenta and ground almonds. It was an enjoyable live demo, accompanied with lots of well received anecdotes about "Bezza" aka Mary Berry and GBBO in general.

This was the last day for the BBC Good Food Show at the Olympia, London, but it will be heading to Birmingham soon. Check out all the latest news on the website:
http://www.bbcgoodfoodshow.com/