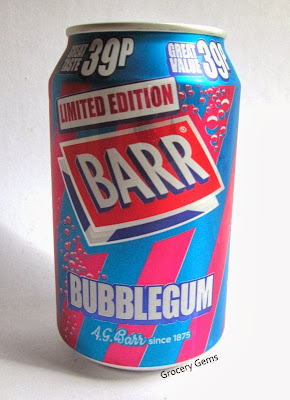 As anyone who reads this blog will know, I love the words Limited Edition. Manufacturers often bring out limited editions in order to try out new flavours or just bring something a bit different to their range. The only downside to a limited edition is of course that it is destined to disappear from the shelves - very annoying if it's a product that you enjoy. Happily there are occasions when a limited edition is so successful that it becomes limited no longer, like this Barr Bubblegum flavoured drink. When it was released in July this year it became one of the fastest selling carbonated drinks in the "impulse market". An impressive two million units were sold, so it's little wonder that Barr decided to make this part of their permanent range. 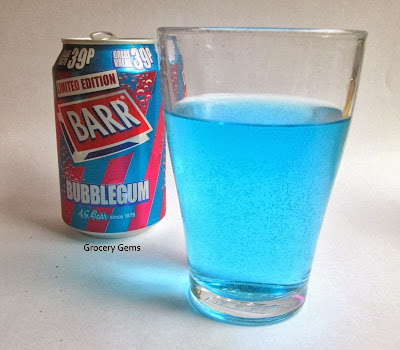 I was one of those two million sales back in July, it was instantly appealing (especially to my eldest son!) and we just had to try it. The drink is a fabulously bright blue in colour and has an immediate bubblegum scent. The flavour is just like those bubble gum ice lollies that are available from ice cream vans - extremely sweet, with a classic bubblegum flavour. It might sound like an overbearing concoction, but the carbonation in the drink helps it to taste quite refreshing and not as overpowering as I thought it would be. Obviously this is not something I would want to drink often but it's a fun product and definitely worth a try.