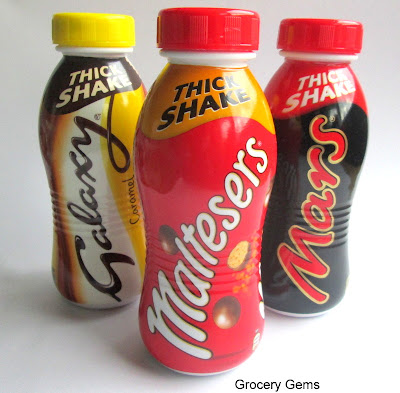 Everyone in the Grocery Gems household wanted to try out the new look range of Thick Shakes that we were recently sent. There were three varieties in our parcel, all based on famous chocolates; Galaxy Caramel, Maltesers, and Mars. The latter two were especially popular amongst all the testers. Each Thick Shake contains 300ml. Nutritional information: Galaxy - 213 calories, Maltesers - 241 calories, and Mars - 221 calories per bottle.


Galaxy Caramel - At first I was surprised by just how pale this milkshake was in appearance. I had expected this to be a chocolate based milkshake, but taking a closer look at the bottle it's simply described as a "caramel flavoured milk drink". It doesn't have any chocolate so it's essentially a caramel milkshake! It's quite milky with a strong caramel flavour, but also a background hint of vanilla. 7 out of 10.


Maltesers - We all loved this one, it's a well blended combination of chocolate and strong malt flavours. Neither flavour the strongest, they both work well together to create a pure Maltesers treat in a bottle. I love chocolate flavoured Ovaltine and this is a bit like a milkshake version of that! 9 out of 10.


Mars - This milkshake is described as a "chocolate and caramel flavour milk drink" so it's quite different from the above Galaxy Caramel. It's much darker in colour and has a sweet chocolately flavour from the outset. There's a subtle edge of caramel but it doesn't overshadow the chocolate. Definitely a hit with my boys! 8 out of 10. 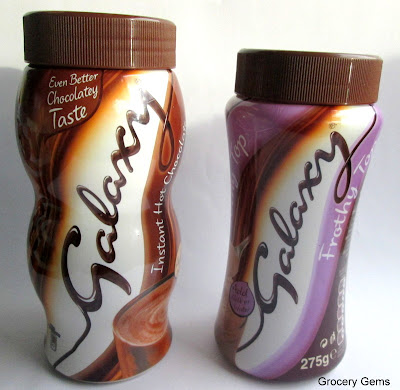 I've been really getting into hot chocolate in the past few months so I was pleased to see these Galaxy Instant Hot Chocolate and Frothy Top Hot Chocolate included in the parcel. Even though I've tried and reviewed a fair few hot chocolates, somehow the Galaxy range managed to pass me by. 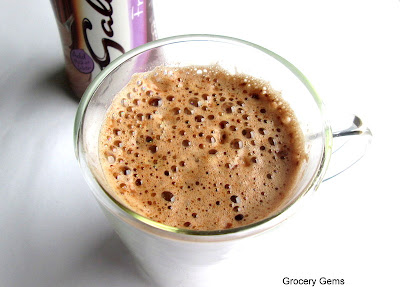 I tried the Galaxy Instant Hot Chocolate first and I was surprised by just how rich and smooth the chocolate tasted. I'm used to instant hot chocolates being very sweet but Galaxy have clearly focused on the chocolate experience with this drink. It's creamy and rich tasting - exactly what you would want from a Galaxy Hot Chocolate. It also has a fairly decent frothy layer on the top so I was interested to see how the Galaxy Frothy Top would be able to out-froth it! As you can see from the photo above it is very frothy indeed! The same rich chocolately flavour is present here with an extra creamy feel. I will definitely be buying from the Galaxy Hot Chocolate range in future. (9 out of 10).