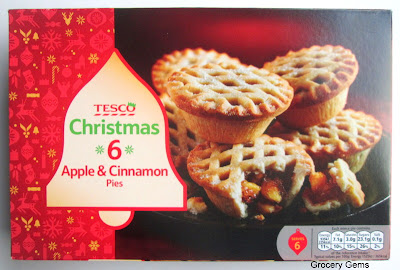 My husband and two boys all absolutely HATE raisins which of course means that they refuse to eat mince pies. I was therefore quite pleased to find these Apple & Cinnamon pies at Tesco to review, as I hoped they could be a welcome alternative to mince pies, especially since we all love cinnamon. It turns out that I should have read the back of the box before purchasing as these pies actually contain sultanas. I know that apples and raisins are quite a common combination but I hadn't expected them as an addition in these Apple & Cinnamon pies. I suppose the only good news, is that I get to keep these all for myself. 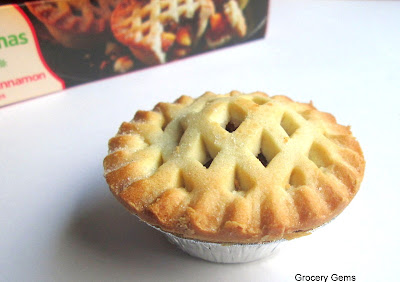 The pies are quite generously sized, and are slightly larger than the Tesco brand mince pies that I've tried this year. They also have an attractive lattice type pastry top. 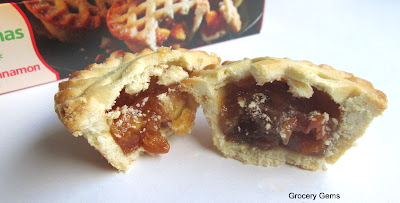 Each pie has a decent enough amount of filling, although perhaps there wasn't enough of the apple pieces. However, I'm the type of person who loves pastry so I was more than happy with the ratio found here. Ultimately it's the cinnamon flavour that is the real winner in these pies, as it's completely delicious. The cinnamon is sweet and strong and tastes wonderful alongside the apple. Even though I really did like these pies, I would still have preferred them to be sultana free, just so the rest of my family could enjoy the delicious cinnamon flavour too.